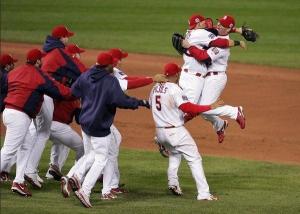 How can the Cardinals get back to this in 2011?

What will it take for the St. Louis Cardinals to win the NL Central in 2011?

It may be obvious, but I say complete teamwork.

I am talking 2006 postseason Cardinals teamwork.

The team that took the field after the All-Star break last season? They donÃ¢â‚¬â„¢t need to be anywhere near this 2011 team.

No, I say good riddance to all those gone from last seasonÃ¢â‚¬â„¢s squad Ã¢â‚¬Â¦ except Aaron Miles, of course. He was the heart! Honestly, I know some of you all still have a desire to see Ludwick and Brendan in Cardinal red. But look, it wonÃ¢â‚¬â„¢t happen! We now have Ryan Theriot, Lance Berkman and Nick Punto.

Jim Edmonds was also looked at as one of those leaders the squad could have benefited from as well. You see, Jimmy brought that leadership in his time with the Birds on the Bat that the Cards were desperately lacking at the end of last season.

Sadly though, news came Friday that Jimmy is retiring after his foot did not respond to an injection to his ailing foot.

I think Berkman and Theriot can bring that presence. Obviously Albert, Yadi, Holliday, Carp and Waino could only do so much with last year’s club. And in the end, I think those became too frustrated. I mean, Carp yelling at Brendan. Come on, that guy is as cool as a cucumber.

More so this year than in past years, the team needs to have a team meeting, closed to managers and management, and hash some things out Ã¢â‚¬Â¦ EARLY.

Albert needs to let this team know that he is committed to them and the Cardinals. He needs to let them know that he will play for 2011. That the contract talks will not be a factor until this teamÃ¢â‚¬â„¢s season is complete. No distractions. The media and fans will be obsessed with this topic enough as it is; the team doesnÃ¢â‚¬â„¢t need the distraction.

Yadi needs to play this season and if he is hurt, he needs to rest. None of this playing hurt and not hustling crap he did last season. Yadi is an excellent catcher. I want him to be excellent for years to come. If he plays hurt and doesnÃ¢â‚¬â„¢t rest, we wonÃ¢â‚¬â„¢t have a great Yadi.

Holliday. He played well last season. No ding-ding moments in the off-season where he Ã¢â‚¬Å“lost the ball in the lights.Ã¢â‚¬Â I think with the amount of money he is getting, though, he needs to be more of a vocal leader in that clubhouse.

Carp and Waino? Not much to say there! Just keep doing what you do, boys. Hopefully Carp will be in a better mood this season with Brendan sipping lattes up in Seattle!

More than anything this season, I want the Cardinals to win and be in first place throughout the season Ã¢â‚¬Â¦ I want them to beat the Cubs and of course, KickinÃ¢â‚¬â„¢ Cueto and the Reds. Just to quiet their fan bases.

You know the Cubs and Reds are hoping for the Pujols contract to be a major distraction.

For that reason alone, this 2011 Cardinal team needs to play like Cardinals and not let ANYTHING get in their way.