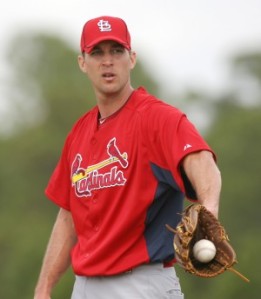 So, how was your Wednesday?

Needless to say, yesterday was a dark day in Cardinal Nation. It would have been devastating enough had just the Adam Wainwright news been all that we had to deal with. Because reading the first reports about your staff ace being sent back to St. Louis with what John Mozeliak called a “significant injury” to his elbow and that the early word is “not encouraging” — especially given the way the Cardinals typically discuss injuries — is a punch in the gut, to put it mildly.

The assumption is that he’s going to need Tommy John surgery and be out for the season. (We will find out more today, following a second opinion from Dr. Lewis Yeocum.) And you don’t just go out and replace a guy who’s won 39 games and pitched 463.1 innings the past two seasons while finishing third and second in Cy Young Award voting.

After the first shock of the news, I tried to rationalize this in my head yesterday morning. Maybe it won’t be so bad, I thought — this kind of thing has happened before. There was Opening Day 2007, when Chris Carpenter made his only start for the World Series champs before hurting his elbow too. Then I remembered what happened that season. And in 2008.

But, back in 2007 when CC was lost for the season, there wasn’t another Chris Carpenter and a Jaime Garcia that also were part of the rotation, nor a Jake Westbrook. There was Kip Wells. Braden Looper. Anthony Reyes. (Are you shuddering at those memories yet?) And there also was Adam Wainwright making his debut in the rotation. So CC’s loss was huge then, as is Waino’s now, especially given the increased competitiveness of the NL Central this season. But even the remaining four Cards starters and whoever takes the fifth slot aren’t enough sunshine and puppies to make things suddenly seem better. Still, the season will go on anyway and games will still be played. 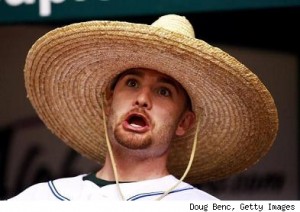 Stupid is as stupid does, apparently

And some of those games might be more than a little interesting, given what we then heard yesterday afternoon. The first report was from Hal McCoy, Hall of Fame baseball writer for the Dayton Daily News. He reported that, upon hearing the news about Waino’s injury:

News spread quickly about Gomes and his actions through Twitter and the Web. (Miranda reported it for us too.) Outrage about Gomes’ comments is probably an understatement, and calling him an idiot probably doesn’t begin to cover it. Gregg Doyel of CBSsports.com had some good comments about the situation, and this quote was interesting:

So shame on Gomes, most of all. But shame on the Reds for not policing him right away. They’d better get on that, pronto, or this PR disaster will escalate.

How to deal with a PR disaster? Damage control. Spin.

Yep, that certainly came next.

The first report “clarifying” the situation that I read was from Mark Sheldon, the Reds MLB.com writer. And among the many things Gomes had to say was this:

Outside of different uniforms that we wear and different cities we play in, playing in the Major Leagues, we’re all brothers. There’s a brotherhood there. There’s one thing you would never wish upon any other player and that’s an injury.

Right … no one would ever wish injury upon another player, Jonny. I believe you. Just like I believe no one on the Reds would be idiotic enough to kick away at Cardinals players while wearing spikes. Because, in the baseball brotherhood you so touchingly speak of, one would never kick a guy in the head and give him a concussion and end his career. Or kick another guy in the back and give him cuts and bruises. Because you’re all brothers. One big, happy family.

After these new words spread, websites and blogs — such as Doyel’s — were updated to include this newest bit of “info.” Later last night, Hal McCoy even updated his own original story and removed the comments about Gomes singing. He also posted an explanation that included this:

I thought the Gomes thing was humorous, with no malice intended by Gomes. That isn’t Jonny Gomes. He is one of my favorite people and I would not do anything to hurt him. It seemed it was Jonny’s way of saying the Reds wouldn’t have to face one of the best pitchers in baseball and he’d never wish injury on any player.

Right. You’re a Hall of Fame baseball writer, you post a story based on what you were inside the clubhouse to hear … and then you delete it and become an apologist for the guy? Hmmm. Interesting. I must have missed class the day that lesson was taught in my journalism school.

This all just adds fuel to the fire that would have already been burning when the Cards and Reds played for the first time this season, which is April 22 in St. Louis. (The Cards first trip to Cincinnati, which I think will be even more intense, is May 13.)

But, despite all the idiocy and backpedaling and hype about a rivalry with what apparently are just a team of thugs and Scott Rolen, one true fact remains: Waino is injured and likely out for 2011. And there’s no amount of spin that can lessen how much that really hurts every Cardinal fan today.

UPDATE: The expected is now official. Adam Wainwright will have Tommy John surgery and be out until 2012.

4 thoughts on “Injury, idiots and damage control — oh my!”