Perhaps it’s fitting that the Cardinals are playing the Dodgers tonight, on Jackie Robinson Day. While the Dodgers were the team that the Hall of Famer debuted for 64 years ago today to become the first African American player in Major League Baseball, there also is a Cardinals connection to the Robinson story. 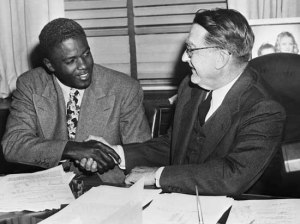 During the 1930s, Rickey’s Cardinals team was known as the Gashouse Gang and were the best of the National League. In 1931, the Cards won 101 games and won the World Series in seven games. Pepper Martin, a rookie that year, was the star of the series and was one of the first to come through Branch’s minors system.

Other future Hall of Famers came through the farm system including Dizzy Dean, Joe Medwick and Paul “Daffy” Dean. This trio was an integral part of the 1934 squad, which won the organizations third World Series.

The league’s Commissioner Kenesaw Mountain Landis, however, didn’t like this minor league system. Landis felt it would ruin the game of baseball by destroying existing minor league teams. The commissioner attempted twice to release more than 70 Cardinal minor leaguers. Rickey’s system stayed intact, though, and similar systems were adopted throughout the league. With the television era upon them, the farm system may have saved minor league baseball.

Rickey’s farm system continued to thrive and in his final year with the Cardinals, 1942, the team had one of their best seasons by winning 106 games and the World Series. The team included Hall of Famer’s Enos Slaughter and Stan Musial, as well as future MVP Marty Marion. Even their manager, Billy Southworth, was a product of the farm system.

Speaking of Musial, he also has a special part in the story of Jackie Robinson. According to an article by Bernie Miklasz on “90 Things to Love About The Man”:

Musial played a positive role in baseball’s integration. He’s never been given enough credit for that. Musial was openly supportive of African American players at a time when they encountered imposing ugliness and hostility from other players, coaches, managers and fans. The immortal Jackie Robinson, who broke baseball’s color line said that “Musial always treated me with courtesy.” This was nothing new to Musial. As a young player in Donora, he’d had African-American teammates and friends, including Buddy Griffey (Ken Griffey Jr.’s grandfather) and always backed them.

Earlier this year, as Musial was receiving his Medal of Freedom from President Barack Obama, Miklasz spoke with Hall of Famer Joe Morgan.

“Stan has always been underappreciated,” Morgan said. “But maybe this will help people understand what a great person he really is. We should always look to guys like Stan Musial. He did everything right. He’s the perfect gentleman.”

And then Morgan turned serious for a few moments. He doesn’t believe Musial has received enough recognition for being a peacemaker during baseball’s uneasy period of racial integration in the late 1940s and early 1950s after Jackie Robinson became the first African-American to play in the majors.

“Stan helped in the civil rights movement,” Morgan said. “He helped Jackie Robinson when Jackie came along. Stan never gets credit for that, but I know personally, from the Robinson family, that Musial was involved.”

On this day, we celebrate Jackie Robinson and the doors opened by him. We celebrate Branch Rickey and his influences on the game. We also reflect on the good role our favorite organization had on the movement. It’s good to know that baseball’s Perfect Warrior, baseball’s Pefect Knight, made such an impact.