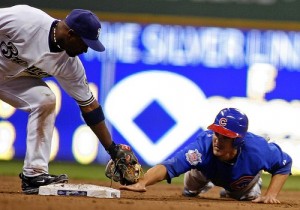 Why didn’t you leave this habit in Chicago?

With all the good that happened in last night’s game — and there was so much, yet again — it’s foolish to focus on the one and only bad part of the game.

Yes, Ryan Theriot was 3 for 5 last night, raised his average to .323 and had an RBI. But, along with that RBI, we saw for ourselves what TOOTBLAN means.

It was the fourth inning, Kyle McClellan (who had a couple of tremendous at-bats facing Clayton Kershaw) was on first after being walked and Theriot was up. He hit a long fly deep to left-center that bounced off the wall. McClellan to race around the bases to score. Yay! And, though Tony Gwynn Jr. fielded the ball right away since it bounced off the wall, Theriot kept zooming along right past second base. Perhaps he thought he could make it to third since Juan Uribe threw the relay from Gwynn to home? Or perhaps he just didn’t think. Regardless, Rod Barajas alertly threw to third, which Theriot was not even close to yet. So he stopped, caught in a rundown. Casey Blake threw to Aaron Miles and, in a moment of hilarity and some weird former Cub cosmic convergence, Our Little Namesake chugged along and caught up with Theriot to tag him out. (See the play here, positively labeled “Theriot’s RBI double.”) And there you have it, TOOTBLAN.

Not familiar with the acronym? It means Thrown Out On The Basepaths Like A Nincompoop. It’s a stat created specifically for, or because of, Ryan Theriot. (Yes, really.) And now we know it’s a habit he did not leave behind when he left Chicago’s North Side, nor when he was traded from the Dodgers to the Cards.

I was willing to give him the benefit of the doubt Friday night, when he slid past second base and was out trying to reach back to tag the bag. But, unfortunately, Saturday night we were Therioted. And there was debate on whether we were perhaps Therioted twice, when Ryan was thrown out at the plate in the top of the ninth after he didn’t slide and didn’t touch home plate at all. But Jose Oquendo sent him in. So we’ll let that one slide … even though he didn’t.

The positive is at least Theriot has to get on base first, before he can add to his TOOTBLAN count. At least that’s what I’m telling myself.

Theriot obviously hasn’t been embraced with the glee that the other former NL Central foe who joined the team has. There are no Ryan Theriot Fan Clubs yet, and the best (though most confusing) nickname for him has been “Theartiot” that Kelly created to replace our former nickname of “The Heart” for Aaron Miles. Miranda continues to mention his Cub cooties, and perhaps that handshake from Stan the Man and hug from Red on Opening Day didn’t quite cleanse all the Cubbiness from him yet. Ah, well, we’ll learn to love him, right?

Speaking of The Heart, little Aaron had a good night for the Cardinals — he grounded into a double play in his first at-bat and, when up with two on and two out in the fourth, he played like a 2010 Cardinal and grounded out. Even though you’re a Dodger now, Aaron, thank you for still being you.

Amid all the highlights last night, which I briefly covered early this morning, there was another relief appearance by The Poet Miguel Batista in the bottom of the eighth. Which led me to write a haiku.

Poem for The Poet — April 16
It could have been worse
With how his inning began.
The Poet escaped.

He did give up his first run of the season, but the damage was minimal even though he gave up a walk and two straight hits. Besides, the Cards went on to score two more runs (though it should have been three) on five consecutive hits in the top of the ninth, so that run was inconsequential.

This afternoon, the Cards go for the four-game sweep — something they haven’t done at Dodger Stadium since July 1-4, 1968. (Bob Gibson was certainly involved with one of those games, right?) Chris Carpenter pitches today, looking for his first win of the season, and will certainly improve on his last outing — the Cards only loss of the past week. Game time is the more normal 3:10 p.m. Central.

5 thoughts on “And Now We Know What TOOTBLAN Means”