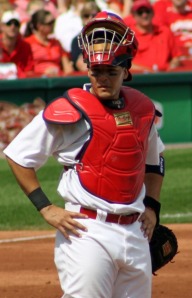 Yadier Molina is not a big home run hitter — he only has 42 total in his career now, and his season high was eight in 2005. Yet his homers tend to be memorable.

No Cardinal fan will ever forget how he silenced the Shea Stadium crowd in game seven of the 2006 NLCS. (Neither will Mets fans — he’s still booed when the Cards play in New York.) Last season in Cincinnati, during the brawl game on Aug. 10, he hit one in his first at-bat to provide his own statement on the proceedings.

And so it was last night that Yadi was once again the hero of the night with a memorable home run, this time a three-run shot in the sixth inning that provided the only scoring of the game. Earlier in the game, he threw out Jonny Gomes when he attempted to steal second. (It’s nice that teams never seem to learn you don’t run on Yadi.)

Jake Westbrook bounced back from his bad outing on Wednesday to have his best, coming on only three days’ rest. Matthew Leach of Cardinals.com provides the details:

The right-hander didn’t allow a hit until the fourth inning, and made it through six with no runs on three hits. He struck out four and walked three, one of them intentional, in lowering his ERA from 9.82 to 7.40.

“I think the first three or four ballgames, I found myself kind of not having a purpose with any pitch, just kind of throwing it up there,” Westbrook said. “Slinging it up there and hoping something good happens, instead of telling myself to have a focus and a purpose for each pitch. I really concentrated on doing that tonight, and felt like I was more locked in and focused on what I needed to be doing. And it helped me out a lot.”

Following Westbrook were three members of what Leach called the “youthful half” of the bullpen. Unlike their elders on Saturday, these three — Fernando Salas, Eduardo Sanchez and Mitchell Boggs — continued their trend of impressive performances. They each struck out two and walked none, and only Boggs allowed a hit before picking up his third save.

The one downside for the Cardinals was that Albert left the game in the seventh inning with mild tightness in his left hamstring. According to Leach, Albert didn’t sound overly concerned about this.

“I think this just all depends how I wake up tomorrow,” Pujols said. “The test was pretty good. I don’t think it’s too bad. But it’s something that, when I wake up tomorrow, I can sense it a little bit more about how I feel. So hopefully, it’s not as bad as I feel right now, and I’ll be glad that we have a day off tomorrow.”

Lance Berkman replaced Albert at first base for the rest of the game.

So the drama of the series against the Reds is now (thankfully) over until they play again in a couple of weeks, the Cardinals won the series (and could easily have swept) and they are now back in sole possession of first place in the NL Central. A successful weekend at the ballpark.

Next up is a trip to Houston — the return of LB to Minute Maid Park for the first time as an opponent. And guess who’s pitching Tuesday’s game? Yep, of course, it’s Cards killer Bud Norris. But with Lance now on our side, maybe things will be different this year.