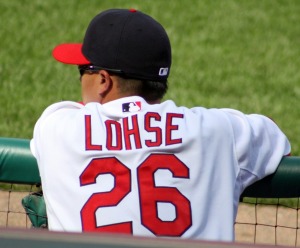 Kyle Lohse got win No. 4, but it should have been easier. (Photo by Erika Lynn, Cardinal Diamond Diaries)

Thankfully, that was a winner.

The Cardinals prevailed over the Astros, winning 6-5 in a game that ended up being way too tense. All’s well that ends well? Something like that.

Once again, Kyle Lohse had a terrific game. He pitched seven scoreless innings — he now has a streak of 19 1/3 scoreless innings, which is the second-longest in the majors this season according to Derrick Goold — and allowed four hits while striking out two and walking one. It seemed a little puzzling he left after throwing only 97 pitches, although he did have a 6-0 lead. Turns out he was sick.

“It is one of those head colds where the adrenaline kicks in and you feel good enough,” Lohse said. “I think now is when I’m starting to feel it a little more, when you kind of let down — glad to get it together enough to go out there and put a pretty decent performance together.”

Of course, it’s only in hindsight that we wish he’d stayed in longer — once the bullpen adventures began.

Ryan Franklin started the bottom of the eighth. Seemed like a decent idea to me, as a 6-0 lead appeared to be a good cushion. Maybe he could pitch well, gain a little confidence. Of course, all nine players on the field have to do their jobs for things to go well. The first batter Franklin faced, Joe Inglett, hit a fly ball to left-center. Matt Holliday ran toward it … and totally missed it. And then pinch-hitter Jason Bourgeois singled to center, but wound up on second base on the throw back in. OK, Franky, maybe you’ll get ’em next time … whenever that may be.

Trever Miller was next. And he promptly walked Michael Bourn. Bye-bye, Trever. As Joe Strauss pointed out on Twitter, the last time Miller recorded an out? April 15, four appearances ago.

Enter Fernando Salas, bases loaded, no out. He’s one of the young guys. They’re the good ones in the bullpen, right? (If you ignore Tuesday night.) He did retire the side … but not before allowing three runs to score. And the third was on a hit by Brett Wallace, who the Cardinals can’t seem to get out. Nice way to treat the team that drafted you, Brett.

Bottom of the ninth, Eduardo Sanchez in for what’s now a save. He’s another young guy, one who’s been great. The one many have wanted to close — and now he gets an opportunity. He struck out J.R. Towles to start the inning. This will be easy! Except it wasn’t. Some hits, some runs, suddenly it’s 6-5. Once again, the defense didn’t help — sorry, LB, you know we love you, but you looked bad missing that fly ball hit by Angel Sanchez. Really, really bad. (You did have an awesome catch in the seventh.) Hunter Pence up, tying run at second, two outs … and Sanchez struck him out. Whew.

A win is a win, but it shouldn’t be that stressful.

Tonight it’s the deciding game of the series, and we’ll assume — given that Minute Maid Park has a retractable roof — Kyle McClellan will make a real start, no matter what the weather. We’ll also see if Dan McLaughlin can calm his man-crush gushing over LB during the Fox Sports Midwest broadcast, but I’m betting that won’t happen. Maybe we can recruit him for the LB Fan Club.

2 thoughts on “Sailing Along For Seven, And Then …”