Pitching has presented some interesting predicaments for the Cardinals’ big-league team this season. Recently, young guys like Lance Lynn have had the chance to prove themselves. And while the immediate future may still have a few question marks, Sunday night’s All-Star Futures game gave St. Louis fans a shining glimpse at what is to come with their top pitching prospects.

Shelby Miller and Carlos Martinez pitched for different teams in the exhibition — Miller for the U.S. team and Martinez for the World team — but each had an impressive scoreless inning.

Miller took the ball for Team USA in the 3rd inning. He quickly earned a strike out and a ground out, but that ever-challenging third out proved slightly problematic. Reds prospect Yonder Alonso battled the count full and then walked on seven pitches. But not to worry, Shelby quickly drew a ground ball force out to end the shutout inning.

He clocked 94 mph on his fastball, which he uses almost exclusively. Of 20 pitches, only five were not fastballs.

Sunday’s battle was about more than just the fellow top prospects he was facing, though.

Miller’s father Mitch is a firefighter and was a close friend of Shannon Stone — the fan who fell over the railing at the Rangers game last week. The impact of Stone’s death was certainly difficult to put aside in preparation for Sunday’s Futures performance. 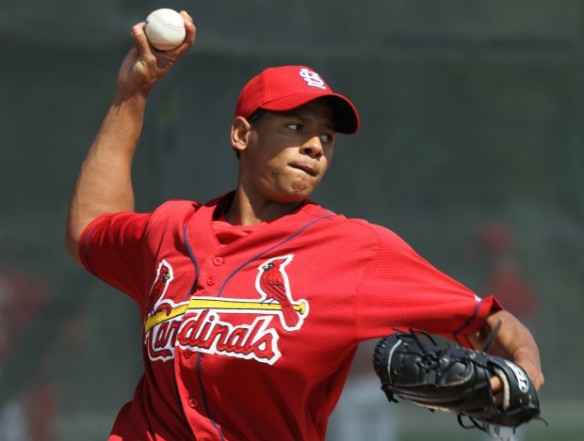 Martinez threw for the first time in the US at a Spring Training bullpen session.

Hard-throwing Martinez pitched the bottom of the 4th for the World Team. Martinez, who impressed the powers-that-be for the Cardinals back in Spring Training, used his blazing fastball, his powerful curveball, and his work-in-progress changeup to get a strikeout for out No. 1. He had a moment against a Reds prospect, too, hitting Devin Mesoraco. But, he followed that by getting Red Sox future third baseman Will Middlebrooks to ground into a double play. (It’s nice when it works in our favor, isn’t it?)

Matthew Leach writes that Martinez is focused on making his changeup as effective as his fastball.

“Right now I’ve really been working on my changeup,” he said through an MLB.com interpreter. “It’s a pitch that’s really helped me [at Class A Quad Cities]. It’s helping me now. And it’s something I’m really focusing on. I know it’s going to help me in the future.”

Carlos began the season with the Quad Cities River Bandits, starting eight games, going 3-2 with a 2.33 ERA before being promoted to the High-A Palm Beach affiliate. He’s 1-0 in his two starts there so far.

Good pitching is always a good sign, and these two will definitely be seeing some big-league action. For now, though, they did their baby bird teammates awfully proud in their All-Star Futures outings.