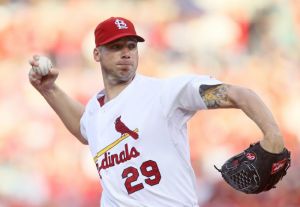 Chris Carpenter likes pitching against the Brewers on Sept. 7.

Two years ago, he had a 99-pitch one-hitter in Milwaukee that the Cardinals won 3-0. (And it’s the one and only start of his I’ve seen in person.)

Last night, he threw his first shutout since that day — a 97-pitch four-hitter and a 2-0 Cards win. It was his 14th career complete-game shutout, ninth as a Cardinal.

The game also was the season finale against the Brewers. And, given what happened in the ninth inning, perhaps that’s a good thing.

Not surprisingly, it was Nyjer Morgan who caused problems. Derrick Goold explains what happened:

Morgan fingered a wad of tobacco from his mouth and flung it in the direction of the mound. That brought Cardinals first baseman Albert Pujols into the mix, and they began yelling at each other. The dugouts and bullpens emptied. No punches were thrown.

And CC didn’t — he needed only four pitches after that to retire Ryan Braun and Prince Fielder to finish the game.Morgan, however, couldn’t leave things be. After being ejected from the game (humorous to see him in the dugout saying “Why? Why?” after the ump threw him out — yep, the ump’s just picking on you for no reason), he decided to share his feelings about the Cardinals and Albert on Twitter. You can see all the tweets here, thanks to Drew Silva.

Reading those makes me think it’s time to modernize that old quote: “Better to remain silent and be thought a fool than to tweet and remove all doubt.” And it’s almost too bad that was the last time the Cardinals and Brewers face each other, because it could have been entertaining to see just how Al Hrabosky and Dan McLaughlin would spin this. They were certainly over-the-top throughout this series with their talking up of Morgan and how entertaining he is — just like they enjoyed telling us all about what a terrific guy Brandon Phillips is whenever the Cardinals and Reds played this year.

Back to things that matter, CC needed some runs in order to win the game. The first came courtesy of some small ball in the fourth inning, which Lance Berkman led off with a double. Skip Schumaker then sacrificed him to third. Yadi was up next and he hit a shallow fly ball to Corey Hart in right. Not deep enough? No way. LB showed he deserves the Big Puma nickname by dashing home to score — so quickly he didn’t even need slide.

Rafael Furcal led off the fifth inning with a home run, his sixth homer as a Cardinal and seventh overall this season. And while his numbers at the plate still aren’t stellar, his defense has certainly been impressive — re-signing him for next year has certainly been mentioned much on Twitter.

So, the win gave the Cardinals a split of the season series against Milwaukee with each team winning nine, and puts the Cardinals 8 1/2 games back with 19 to play and keeps the Brewers magic number at 11.

The wild card race, though, is looking a little more interesting. The Cards are 6 1/2 games behind the Braves, who play a double-header against the Mets today and then head to St. Louis for the weekend. Hmmmm … Let’s go, Mets!


On a completely different subject, seems like Tony La Russa had an interesting evening after the Cards win Tuesday night — as Matt Sebek details at Joe Sports Fan. It’s really too bad the Cardinals were out of town when U2 played at Busch Stadium. TLR and Bono seem like a natural fit.