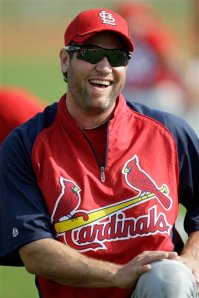 Lance Berkman lead the team Monday night with a 2 for 2 performance that included a 2-run homer in the first inning.

That’s right! The Cardinals, the worst team ever by some accounts on Twitter, won three of four in Philly. The Cardinals are 10-2 in their last 12 games. And this has brought them to 5.5 out of the National League Central and 2.5 back in the wild card.

The Cardinals learned they were tightening up that wild card race during the manager’s Tony TV segment on Fox Sports Midwest. The players yelled, “Infante!” after his walk-off home run. TLR could be seen pondering the possibilities with a rare smile on his face. Nice to see after this crazy season! (If you missed the moment, check it out here.)

All this winning makes you wonder where this team was back in April. Makes me happy the Cardinals have a completely different team now!

September’s version of the 2011 Cardinals has a little over one week to prove all the non-believers wrong.

I know, I know … we shouldn’t be too hopeful. That’s what the haters will have you believe. But I have to say, don’t fall for the negative! With the Mets and Cubs coming to St. Louis and a final trip to Houston, there is a little bit of anxious anticipation that the Cardinals might just be able to pull off something big.

Football is in full swing and anxieties are high over fantasy football and the upcoming hockey season. And … I know some folks already have TLR and Albert Pujols’ boxes packed up to leave St. Louis, so this request may be hard for some.

But, after such a heart-wrenching season with this team we obviously love, how about we just watch? How about in this final week, we  just sit back and watch the team you love try something unbelievable?

Can you handle it? No? Have you no hope! Are you really a Cardinals fan?

I’ll stop judging you. Just watch this final week, OK! It’s sure to be some excellent baseball.

Miranda Remaklus is lead St. Louis Cardinals contributor to Aaron Miles’ Fastball. She is also senior reporter at Aerys Offsides in the NFL section. Follow her on Twitter, @missmiranda.