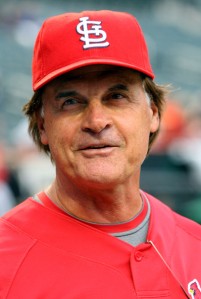 Seeing there was a news conference scheduled for 9 a.m. this morning seemed a little odd, given the Cardinals World Series parade was just late yesterday afternoon. And the news that was announced is a stunner: manager Tony La Russa is retiring.

As noted in an article by Joey Nowak on Cardinals.com:

La Russa, 67, most assuredly a future Hall of Famer, ranks third in baseball history in managerial victories with 2,728, behind only Connie Mack (3,731) and John McGraw (2,763). Only Mack has managed in more ballgames. The Cardinals skipper is also the only manager in Major League Baseball history to win multiple pennants in both leagues and the second to win a World Series title in each, as well. La Russa’s Oakland A’s won the World Series in 1989. Hall of Famer Sparky Anderson won World Series titles with Cincinnati and Detroit.

La Russa said during the news conference that he told the team last night, after the Cardinals victory celebration.

And what better way to go out than on top, especially after such an amazing fairy tale run that the team made to get there.

Much more on this later, and what it means for the future — names for possible Cardinals managers are already flying fast and furious on Twitter.

In the meantime, thank you, Tony La Russa, for all you’ve done as Cardinals manager. You’ve been praised, you’ve been criticized (and both within the past week) but your impact and legacy have definitely played a major role in Cardinals history.