In 2006, he was busy winning the title of World Series MVP. Now, he spends his time backing up his wife in her latest business venture and exploring a few projects of his own. David Eckstein’s most recent project, however, took him out of his comfort zone and into the recording studio.

No, no, he’s not going to be the next Michael Buble. It’s not that kind of recording. David lent his voice to Jumping Pages, recording the narration of the company’s debut e-book for iPad. Appropriately, the story is “David and Goliath,” and the 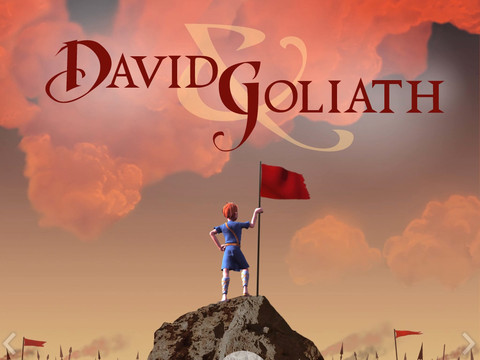 The debut Jumping Pages production is now available for download on iTunes.

MVP version is told by our very own, real-life David who faced his own real-life giants.

Last week, I had the privilege of talking to John Casey of Jumping Pages Inc. in an interview for the United Cardinal Bloggers Radio Hour. He was able to offer great insight into why they chose David, what it takes to produce a first-rate e-book app, and how David fared in the studio.

Of course, any great project starts with a great idea. For a book app, that idea must start with a great story.

Now, this book app is not just a publication as a print book would be. It isn’t simply pictures on a page, surrounded by inspiring words. Instead, it’s a complete studio masterpiece, complete with stunning graphics, cinematic soundtracks, interactive pages and, of course, engaging narration.

Sounds like a daunting task … especially when your voice over actor is a complete newbie!

“It was amazing,” Casey told me. “[David] had never done anything like this before, so I think we were all just a little nervous.”

David’s “MVP” version of the book is an alternate version — the other is narrated by OBIE Award winning actor Michael Cumpsty (who guest stars as a priest in Boardwalk Empire). Simply put, the ’06 MVP had some big shoes to fill.

“The women I work with at Jumping Pages were a little leary about David Eckstein coming in here [wondering], ‘Is he going to have the voice to do this?'” Casey recalled.

However, their fears were quickly calmed.

“He went in that recording studio just like he prepared for a game,” Casey said. “He was prepared. He had notes on his pages, he had the right questions to ask. That light went on and he had to record it, he did an amazing job for someone who’s never done that before. We couldn’t have been more pleased.” 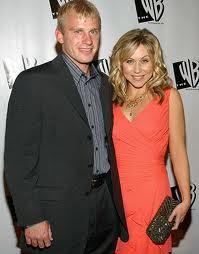 David, with his wife — voice over actress and creator of Her Universe — Ashley Eckstein.

Now, David will be the first to give credit to his coach on the sidelines — his wife, Ashley, who is no stranger to the studio (or to Star Wars fans, as she is the voice of  Ahsoka Tano in Star Wars: The Clone Wars the movie and television series). Through David’s recording sessions, she had the rare chance to watch him enter her world. And he did her proud.

Ashley had the chance to contribute to the app as well, recording a short afterward. There, she draws upon her husband’s experiences in baseball and explains what is, perhaps, the most powerful message of the story — everyone, every day has their own “Goliaths” to face. It’s all about finding ways to overcome them.

David is no stranger to the concept of being the underdog. His entire career, he was too short, to small, too this, too that. Yet, he found ways to overcome.

In the 2002World Series, Eckstein fans drew a literary parallel — David and the Angels vs. Barry Bonds and the Giants. Fans even had t-shirts made with the theme — “David vs. Goliath.”

Of course, Cardinals fans know he didn’t stop there. Instead of conceding to the critics, he found Tony La Russa who loved to use scrappy little underdogs and turn them into MVPs. And that’s just what he did.

“Man, if you’re a little boy, one of the biggest dreams you could possibly have in your life is to be an MVP of a World Series and he did that,” Casey — who is a big baseball fan himself! — said of David. “I’ve worked with a lot of famous actors and actresses, I’ve met a lot of people in my life. But to have the opportunity to work with a World Series MVP … that was a special thing.”

It’s not just the creators at Jumping Pages that are pleased with the end result. The book app has been raking in sparkling reviews from app critics and “mom-blogs.”

“Most of us know the Biblical story of David And Goliath. But now a modern day David – David Eckstein, has narrated the epic story, with wonderful 3D animation, music and some interesting activities which kids will enjoy. 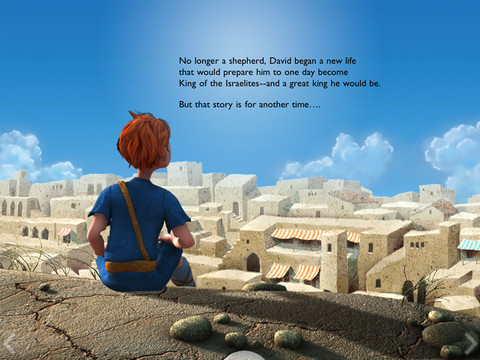 “The MVP Edition is filled with stirring 3D animation and engaging interactivity that brings to life David and Goliath’s epic battle … David and Goliath for the iPad is a unique experience for the reader on every page. Never before have animation, interactivity and a musical score been brought together in such an uplifting way.”

“The illustrations for David and Goliath are top notch … I especially like the positive message included at the end about battling our own Goliaths. It’s a wonderful message for readers of all ages and the story is shared in a captivating way.”

“It’s like watching a Disney production. The work is that good. With its soaring soundtrack, sweeping scenes and brilliant set of interactive features, the David and Goliath for the iPad MVP Edition app is one of the highest quality eBooks out there”

If you happen to be on the Upper West Side of Manhattan on Wednesday (11/30) at 7:00 p.m., David and Ashley will be making an appearance to read, demonstrate, and discuss the book at the Apple Store on Broadway. Stop in and see it all for yourself!

And, lest you think that’s all, David and Ashley are giving their cut of the proceeds to charities they support, including the Bags of Hope of Central Florida’s Feed and Read program for children.

On and off the field, David Eckstein is still — and likely always will be — representing the birds on the bat with excellence and compassion.