Today is a day many in Cardinal Nation never imagined would come.

I’ll try to avoid the melodramatic undertones, but I can’t make any promises. It doesn’t feel good, that’s for sure.  It feels wrong, actually. Terribly wrong. But, it is what it is. The legend of El Hombre is over.

After days of unfounded speculation, conflicting sources, breaking news, and debunked rumors, Albertgeddon is no more. 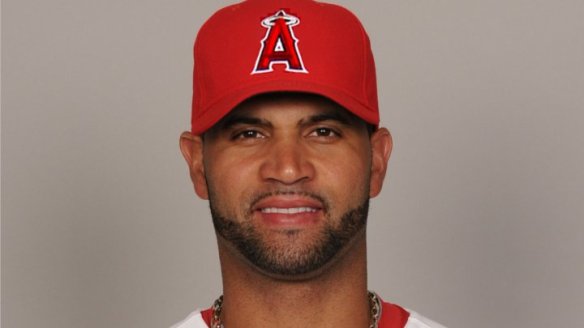 And yet, the sky isn’t falling.

After the dust settled, Cardinals’ Chairman and CEO Bill DeWitt Jr. made an official statement on Albert’s decision.

We are disappointed that we were unable to reach an agreement to keep Albert Pujols in St. Louis. Albert is a great champion and we will always be thankful for his many achievements in a Cardinals uniform, as well as his contributions to the St. Louis community. I have the highest regard for Albert both personally and professionally, and appreciate his direct involvement in this process. I would like our fans to know that we tried our best to make Albert a lifetime Cardinal but unfortunately we were unable to make it happen.

The Cardinals reportedly bumped their offer to more than $200 million, but when the Angels swept in with an estimated $250 million offer, Albert took the cash and ran.

But, it’s not about the money.

Before the season began, Pujols claimed it was his goal to be a Cardinal for life. That, and to not turn the off season into The Decision II.

Now, before you jump me for claiming his choice is, in fact, all about the money, and say the Marlins offered him more cash, I know. They seem to have hit $275 million before Albert said no. But, the point is, the money he was offered from the Cardinals was roughly 12% less than the Angels’ offer. Twelve percent was enough to say goodbye to the best fans in baseball, to a living legacy that many compared to  Stan Musial’s, a community that made his charity work a smashing success, and embraced him even in a “down” year.

If he thinks he’s going to get that in LA, he has another thing coming.

I’ve seen all the comparisons — it’s like dating a girl for years and having her turn down your marriage proposal. It’s like LeBron walking away from Cleveland. Waking up to find Albert signed somewhere else was like waking up to find the city of St. Louis had forgotten how to tie shoes. (Thanks, Twitter.)

It hurts. Call him selfish, hypocritical. Wish him good riddance. Write him out of your life. Say we’re better off without him. But it still hurts.

The man we vested time and money into turned his head and walked away. For me, the first real hero I clung to as a young fan didn’t want what we could give. He didn’t want to be a Cardinal.

As our friend Daniel from Cardinal70.com tweeted, if you can turn down a personal plea from Stan the Man himself and $200+ million, then there’s really not much else that can be said. There’s no convincing you.

From the sounds of General Manager John Mozeliak’s statement (and his decision to leave the media at the Winter Meetings comment-less), he’s not pleased either.

Albert has been a special player in this organization since the moment he was drafted over 12 years ago. His accomplishments on and off the field have been spectacular. I wish him well in the next phase of his career.

Very politically correct, Mo. But no love for No. 5. Not really, anyway.

But, I’m starting to look at the bright side. The sun is still shining, Busch stadium still ready for a new season and its new challenges.

I’m proud of the front office for not stretching to out-bid the Marlins and the Angels. A 10-year deal is slightly ridiculous anyway, but as long as there’s no DH in the National League, it’s almost suicide. That’s one reason the AL West Angels were a solid fit. (They also have a new $150 million TV deal headed their way that was burning a hole in their pockets!).

Baseball is a business, after all, and Mozeliak may have protected the organization from handcuffing themselves to a bad business deal.

Now, the Redbirds have $200 million to play with. The options are wide open. And, they already have one of the strongest teams in the NL headed to spring training.

Perhaps our very own MVP said it best:

Blessed to have played and won a world series with Albert. Now it’s time to win one without [him]. New challenges. New opportunities.

We are Cardinal Nation, not Albert Pujols Nation. While we’re sad to see him go, we’re excited for what lies ahead.

And excited that Albert won’t have to come to Busch very often. That would be awkward.

6 thoughts on “Not Even Musial Could Convince No. Five To Stay”