It’s Monday. The Cardinals went from sweeping the Diamondbacks to being swept by the Braves. (Just in case we needed further proof that it’s now 2012 and not late in the 2011 season.) The Cubs are in town for a bizarre tonight/tomorrow afternoon series before the Cards head back West.

We need something to perk us up.

One of the bonuses of the Tony La Russa number retirement festivities was seeing so many clips from throughout his Cardinals career — the playoff teams of the early 2000s, for example. Which, of course, included current Cards manager Mike Matheny.

With that in mind, here’s a look back to those playing days to get us all going this morning. 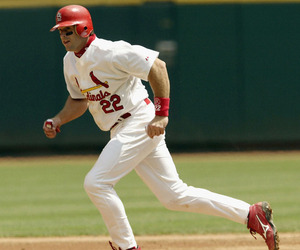 He looks really young in this one below (and is that John Mabry in there too?)

Those were the days … (Anyone else miss Woody Williams?)

I don’t know what this is about. Didn’t the 2004 season end with the Game 7 NLCS win over LB and the Astros?

How ’bout a little feistiness for your Monday?

Finally, you’ll probably wish this pic was just as big as the one above …

So how’s your Monday going now?