Lots of news from the St. Louis Cardinals 10-9 loss to the Philadelphia Phillies.

Like the Cardinals now being in second place in the NL Central, looking up at the Cincinnati Reds. An 11-12 May thus far combined with a 14-8 month for the Reds (and a current six-game winning streak) means that 4 1/2 game lead the Cards had on May 2 is now gone.

And the reason for the Cards mediocre May was on full display last night — the decline of the pitching after a great April, both starting and relieving.

Oh, and speaking of full display, there also was a streaker. Unlike the Rally Squirrel, however, the Rally Streaker didn’t actually motivate the Cardinals to victory.

Too bad he didn’t pitch — the Cards could have used some help. Scoring nine runs on 15 hits doesn’t usually result in a loss … except when you give up 10 runs and 18 hits.

So the offense did more than their share. They came back from a 6-0 second inning deficit to tie the game at 7-7 in the fifth. Jake Westbrook was gone by that point, having only lasted 3 2/3 innings and allowing six runs. And props to Brandon Dickson for coming in during the fourth with the bases loaded. There were two outs and, two pitches later, the inning was over.

Fernando Salas … not a good night, since he promptly allowed the Phillies to take a 9-7 lead in the sixth. And Victor Marte gave up a homer for the Phillies 10th run.

Speaking of homers, the Cardinals had a nice power surge last night — homers from Matt Holliday, David Freese and Yadier Molina. Yadi was actually 4 for 5 on the night, and Carlos Beltran was 3 for 5.

But it wasn’t enough. 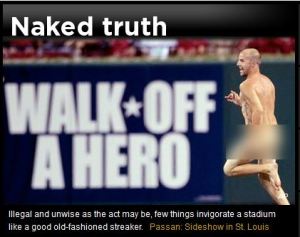 So, back to the streaker instead.

This was the main image on the Yahoo MLB page this morning — and the “Walk-Off a Hero” billboard is better than their “Naked truth” headline. Still, Jeff Passan has an entire story on the streaker, which includes this:

When they finally caught him, some of the guards were chuckling. At least the ones not throttling a naked man. “I don’t want to be that cop,” Cardinals utilityman Skip Schumaker said.

David Freese also had a comment on the Not-Really-Rally Streaker and the delay of game he caused in this article:

”He was naked. He’s not carrying much,” Freese said. ”That relaxes that aspect of the drama. I guess naked’s better. I don’t know. Less to worry about.”

There’s more on the streaker, depending on just how much you’re interested:

So was the use of the word “streak” intentional in the Post-Dispatch’s “Cards’ streak comes to an end” headline? Given that the streaker actually is mentioned by Joe Strauss, hopefully. It’s not every day that Strauss uses the word “underpants” in a Cards game story either (although I’ll bet he’s wanted to for a long time). In contrast, Jenifer Langosch doesn’t mention the streaker at all in her Cardinals.com story.

Ah, well, unlike the Rally Squirrel, the Rally Streaker will likely soon be forgotten — and that’s good.

No need to worry about how to engrave his image on the side of the 2012 World Series ring.

To keep up with the Phillies’ side of things throughout the weekend, check out View from Section 116.

4 thoughts on “Maybe The Rally Streaker Should Have Tried Pitching”