The news was first reported by the Alburquerque Isotopes, the Dodgers’ Triple A team that he’d been on since mid-May, then via Hardball Talk and elsewhere, and finally by Aaron himself last night via Facebook:

To all those who care. I am officially done playing professional baseball. What a run and adventure it has been. Such a bittersweet moment in my life right now to walk away from this passion I have for playing the game at this level. So happy to be able to come home to my kids and devote my energy and passion to them. Like Sammy Sosa said baseball been very very good to me and I will continue to very good to it, just in a different form. Thanks for all the support from everyone who ever cared where I was playing or how many hits I had, I always felt as if I had a community behind me and that is one of the greatest feelings anybody can ever have!!! Thank you!!! Stick a fork in me!! Free agent softball player!!!!

Obviously, we here at Aaron Miles’ Fastball appreciate him and what he did, both on the pitchers mound and off (check out that picture above!) And we wanted to see what memories other fans have of the Aaron Miles Era in Cardinals history. Which meant, of course, that we asked via Twitter.

Turns out we are not alone in our admiration of those five performances, based on the responses to my tweeted request.

@tarawellman @AMilesFastball pitching!! I remember him coming in against the Phils in late innings and of course, many clutch hits!

@tarawellman@AMilesFastball Four years ago tonight, I first got to see @Aaronmiles5 pitch! Blowout loss to the Phillies on my b-day.

Uh, thanks, Fake Jay … not sorry I missed the real version of you on the Cards broadcast last night, by the way.

Anyway, I had the privilege of seeing Aaron pitch in person just like Kenny did above. It was on Aug. 3, 2010, which actually was the day after my birthday. The game, as you can tell from the scoreboard in the picture, was pretty ugly despite the fact the Cardinals took a first-inning lead over the Astros. Jaime Garcia has an ugly night, and things just got worse from there.

Aaron was actually playing third base that night, so he’d already been in the game (and might have been exhausted by the time he pitched due to all the conferences on the pitchers mound that had taken place up until then). There were not many people left in Busch by the time the ninth inning finally arrived — you can see that in the picture above as well — but of course we were still there. And, seriously, the crowd (such as it was) literally went wild when he took the mound.

He was the most successful Cardinals pitcher of the night too. A one-two-three inning, to greater increasing cheers.

Best moment: he came to bat in the bottom of the ninth, announced as “pitcher Aaron Miles.”

Obviously, the evening had its impact on me.

I also witnessed another sure-to-be-rarity in Aaron’s career: he was the designated hitter during a Cardinals-Royals game in Kansas City in June 2010 — much to my friend Michael’s displeasure. While Michael expressed his disgust with Tony La Russa over the assignment, his wife Tammy and I used the occasion to cheer all the more for Aaron during his first at-bat. He no doubt heard us, since he doubled. (Michael’s response: “He doubled just to piss me off.”) Next at-bat, a single. I think it shocked Michael into silence.

No one else mentioned that particular episode as their favorite memory, but one Twitter response mentioned another amazing story from very early in Aaron’s pro career. Fake Al Hrabosky (yes, really) responded with “The one time he was robbed. Not remembering the exact story. Ask Shannon.” Real Shannon or fake Twitter Shannon? Anyway, yes, Aaron was the victim of a robbery.

Read the entire story — and here’s just the first sentence: “The cold, steel barrel of the robber’s gun was pressed into the back of Aaron Miles’ head for 45 minutes as Kissimmee police surrounded room 252 of the Holiday Inn.”

Aaron really is a BAMF. 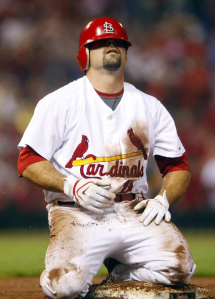 And is versatility –baseball-wise — is one of the things that Cards fan did appreciate, as Laura tweeted.

@AMilesFastball More than a moment my favorite AM thing was his willingness to do whatever was asked & always give it everything he had.

@AMilesFastball Seriously choking up a little. Can we get him to do a farewell tour to STL?

But back to Laura’s first tweet. Yes, he definitely was very versatile and always (of course) played hard. That’s why this picture really is my absolute favorite, even more than any of the pitching ones. Scrappiness personified.

And that’s what we’ll always remember about Aaron Miles.