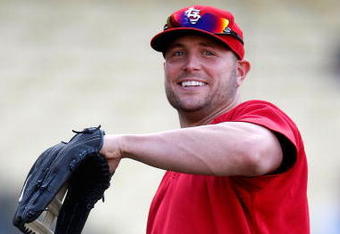 Who doesn’t like the resurgence by the offense? (Rhetorical question … unless you’re a Royals fan.)

Then there’s Adam Wainwright, who’s having a resurgence of his own. In seven innings today, he allowed only six hits and two earned runs, striking out four and looking much more like 2009/2010 Adam Wainwright than he did earlier in the season.

It was another good day at the ballpark — especially with all the red clothing and chants of “Let’s go, Cardinals” that could be seen and heard.

And it was another good day for Matt Holliday. After having three hits last night, he had four more today plus drove in two runs.

He was far from alone in hitting today, though. Everyone except Tony Cruz, starting for Yadi at catcher, had a hit. And, with the exception of a Holliday double and Allen Craig’s two-run homer in the seventh, all were singles. The Wrench had three RBI on the day, also driving in the Cards’ final run in the ninth.

The biggest inning for the Cards was the fifth, when five consecutive singles by Daniel Descalso, Rafael Furcal, Jon Jay, Holliday and Carlos Beltran scored three runs. Small ball, anyone?

Furcal had two hits again today, so — like the team overall — it seems like his slump is over. Raffy drove in a run in the sixth, off Royals reliever Francisley Bueno. Yes, for that inning the pitching match-up was in fact Waino vs. Bueno.

Yet it was the Cardinals, and of course Waino, who were bueno in this game.

Tomorrow, the Cards will try to continue the hot hitting as they go for the sweep against the Royals. Game time is 1:10 p.m. with Lance Lynn taking on Jonathan Sanchez. Remember to visit Drinking the Royals Blue-Aid for the K.C. perspective on the I-70 series.

The tributes in honor of Darryl Kile and the 10th anniversary of his death yesterday have been many, and all are touching.

4 thoughts on “Hits, Wins Keep Coming For The Cardinals”