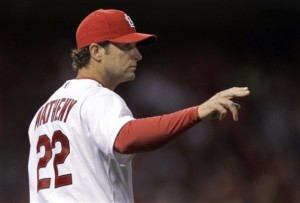 Sure, when the Cardinals left St. Louis after that awful 15-inning loss to the Royals on Father’s Day, everyone would’ve been beyond thrilled to know the team would go 6-3 on the nine-game road trip.

And, big picture, it was a great trip.

The reality of the final game, though? Ouch.

The bullpen had a rough go of it last night, as the Cardinals ended their five-game winning streak and the road trip with a 5-3 loss to the Miami Marlins.

It started off positively, as the Cardinals got on the board in the first inning for the second straight night. After a Jon Jay walk, Matt Holliday doubled and Carlos Beltran hit a sacrifice fly. David Freese then doubled in Holliday to put the Cards up 2-0.

Joe Kelly had another very good outing. The two runs he allowed were the result of walking the first two batters in the fifth inning — never good to walk the lead-off man, as we know — and those were the only two walks he had. He gave up five hits and struck out three in six innings.

And, thanks to Tony Cruz, he was in line for his second career win. Cruz led off the seventh with a home run that almost hit that Marlins monstrosity in left-center field to put the Cardinals up 3-2. With more than 20 family members and friends in attendance, it was the perfect time for his first career homer. The lead was short-lived, though.

Fernando Salas was first in from the bullpen, and he struck out Gaby Sanchez to start the seventh. Next up was John Buck, who homered to tie the game. This was the third straight appearance in which Salas has allowed at least one run, after a series of successful outings when he returned from Memphis a few weeks ago. His ERA is now 5.55.

Salas was gone after the homer, replaced by Sam Freeman. First up: pinch-hitter Logan Morrison. End result: back-to-back home runs, although this one had to be reviewed by the umpires to decide whether it was or not. Freeman got one more out before being replaced by Victor Marte. He gave up three straight hits in the eighth inning for the Marlins fifth run of the game.

Some numbers on the bullpen from Derrick Goold of the St. Louis Post-Dispatch:

In their past 18 games, 15 of which were against American League opponents, the Cardinals have won 10, but the bullpen has been involved in losing four of the other eight. The Cardinals’ bullpen ERA climbed to 4.46 ERA after Wednesday’s fizzle, and that ranks in the bottom half of the league. A month ago, Matheny described how the bullpen was “still defining itself” with the addition of a rookie like Freeman and return of Salas.

Perhaps a little more definition is in order.

Yet, with Heath Bell on in the ninth inning, the Cardinals tried to come back. Matt Carpenter led off with a single for a promising start. But pinch-hitters Daniel Descalso, Yadier Molina and Allen Craig couldn’t get anything more going

And thus it ended — the game, the winning streak and the road trip.

Today’s an off day for the Cardinals, with the Pirates coming to town for a hot weekend series. (Literally.) The two are currently tied for second in the NL Central, two games behind the Reds.

Just as a reminder, it’s the final day to vote for the All-Star Game. The ballot is available here and you can vote up to 25 times per email address.