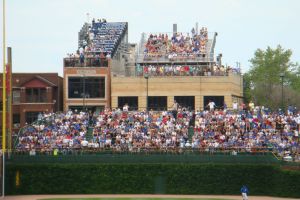 Five home runs in the first five innings set a St. Louis Cardinals team record, as the Cards went on to a 9-6 victory over the Cubs. It was their fourth straight win and, given last weekend’s sweep, the fourth consecutive win over Chicago as well.

The Cardinals have gained no ground in the NL Central, however, as the damn Reds have won eight straight games. St. Louis remains 5 1/2 back, with the Pirates — who’ve now won three straight — two back in second. On the plus side, the Cardinals are now eight games over .500 for the first time since they were 20-12 on May 11.

Yesterday was the Cardinals’ second straight weekday game, which makes it tough for some people (like me) to have the chance to watch. Listening on the radio is a good substitute, but never as good as actually seeing the action. Here’s a look at all five homers from yesterday, conveniently compiled into one video — thanks, MLB!

The sluggers were, in order: Matt Holliday (of course — who’s hotter?), Yadi, Lance Berkman (hearing this on the radio prompted me to spontaneously applaud), Matt Carpenter and Allen Craig. Nice to see that the homers by LB and MCarp were at least caught by Cardinals fans, meaning no throwing the balls back onto the field. Lance’s homer also marked career RBI No. 1,200 for him. The LB Fan Club is very proud!

Obviously the Cubs were not held scoreless like they were for much of last weekend. They got on the board in the first inning, taking a 3-1 lead in the first and scoring three in the third. That was it, though. This awesome catch by Jon Jay on a fly hit by Anthony Rizzo in the fifth definitely helped keep it that way.

Given that the Cubs scored six in the first three innings, it was not the best day ever for our Wolf Pup, Lance Lynn. He lasted five innings, which was just enough to pick up his 13th victory. And he had this happen. That wolf mane just can’t be tamed …

The bullpen pitched four scoreless innings, only allowing two hits with three strikeouts and one walk. Two of the strikeouts were in the successful debut by Brian Fuentes in the sixth, though his entrance into the game prompted much virtual hang-wringing and dismay on Twitter.

And our Barret Browning was allowed to pitch an entire inning again — obviously with good results.

A full inning for you to pitch and it was successful, it’s true.
Because retiring the side in order is what you almost always do.
Hopefully Mr. Matheny now realizes just how valuable you are
And you continue to excel — we want your career to go far!