Another month for our Cardinals has come, now gone — good-bye to July.
And, finally, a winning month again at 15-10 did not necessarily make us cry.
Plenty of slugging for the month from several Cardinals, it’s true.
As the month went on, the three of us felt pretty sure we knew just what we would do.

For it seemed pretty obvious that our July BAMF would be one Holliday named Matt.
His slugging that began in June didn’t really slow down. Case closed, he wins — that’s that.
For he had 33 hits plus a streak that started in late June and totaled 15.
And also seven home runs and 22 RBI, plus many other positive stats in between.

But then we realized there was someone else who had 33 hits during July as well.
And they came in almost 20 fewer at-bats — that really is pretty darn swell.
Yes, we at first overlooked the month that was had by that guy named David Freese.
Yet couldn’t really, plus his 2 homers and 11 RBI and 11-game streak — oh please!

Especially when we discovered that his .458 average made him July’s NL best.
Topping even Andrew McCutchen, who’s been so hot — this was really a test.
How could we deny David his due? He really does deserve this award.
Hitting over.450 for the month is an accomplishment. To ignore it would be untoward.

But what if it’s pitching that you favor instead? The Cardinals had a star there too.
True, Mitchell Boggs and his 13 scoreless appearances in July don’t really make you say woo-hoo.
Yet his streak through Tuesday was 20 straight innings. Does that do anything more to impress? 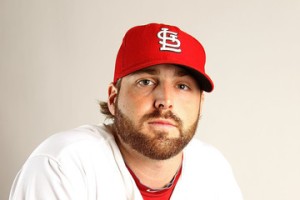 Miranda said no, batters and relievers don’t compare — she considers his streak something less.

That is a good point, for he hasn’t been perfect though still allowed nary a run.
Yet he still had a great month, just like Holliday and Freeser too — that’s what makes it so fun.
Many worthy Cardinal candidates once more for our monthly BAMF, indeed.
Holliday? Of course. Freese? Absolutey. Boggs? Personally, he does fill that need.

So once again we’ll leave it up to you, providing you the chance to cast your vote.
I’m sure Boggs won’t get much support but I’ll leave him in — it’s not like he was a goat.
Decide what you prefer — the slugging power of Holliday? Or the consistency from David the Freese?
Now that July is over and August has begun, will the summer finally provide us a breeze?

(Yes, lame last line … but at least it rhymes!)

And what do you have to say about last month?