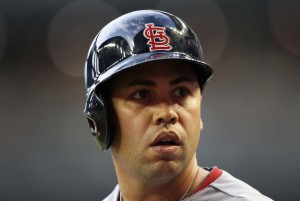 A Friday night in Philadelphia, Cardinals versus Phillies. Roy Halladay on the mound. A tight, tense pitchers’ duel …

Unlike a Friday night last October, however, Friday night’s game had a different outcome as the Cardinals lost 3-1.

Kyle Lohse did about as much as he could, once again having a very strong outing. K-Lo pitched seven innings, allowing one run on four hits with seven strikeout and two walks.

He only had one tough inning — the second, when he allowed a lead-off double to Ryan Howard followed by and RBI-single to Domonic Brown.

And Roy Halladay was Roy Halladay — that one we saw last October. He allowed the Cardinals only run on a second inning Carlos Beltran homer, along with only a single to Jon Jay, and struck out eight.

Those two terrific starting pitching performances meant that the bullpens decided the game.

Barret Browning relieved Lohse in the eighth, and it was not a good night for Barret.

Single and a balk.
Sacrifice moves J-Roll up.
Utley homer — NO.

But, yes, that was exactly how it went for the first three batters Browning faced. He did strike out Howard and get Brown to ground out.

And that led to the top of the ninth.

After Jay grounded out, Allen Craig doubled to right center off Jonathan Papelbon. Matt Holliday was out number two, but Beltran singled to right. Runners at the corners, David Freese at the plate, let’s all remember magic moments from last October …

Except Beltran tried to steal second and was easily out, as Papelbon hadn’t delivered the ball to the plate. Oops. Game over.

Hey, there have been more significant caught-stealings to end games throughout baseball history (although the Cardinals benefited from that particular one).

Still, tough way to lose. Tough game to lose too — especially on a day when the Reds won and the Pirates lost. Forty-nine more games to go.

And the next is tonight, with Jake Westbrook and Cliff Lee starting. Game time is 6:05 p.m. Central Time.

2 thoughts on “Tough Night For Cardinals In Philly”