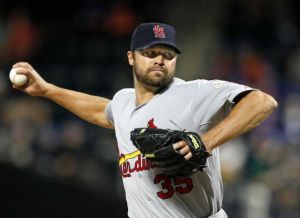 The St. Louis Cardinals bounced back Saturday night, once again getting terrific starting pitching combined with some big hitting that added up to a 4-1 victory over the Philadelphia Phillies.

Westbrook wowed? Indeed he did.

Jake Westbrook pitched 7 2/3 innings, only allowing four hits and the one run with three strikeouts and two walks. His sinker was doing its job, meaning that the majority of outs he recorded were ground balls — 17 of them, in fact. And that provided plenty of action for the infield, particularly at second base.

Which was where Ryan Jackson, normally a shortstop, was making his major league debut.

As Mike Radano describes, a rough beginning turned into a decent evening:

Through six innings, the Phillies managed just three hits off Westbrook, including a first-inning single by Chase Utley originally ruled an error on Jackson.

Jackson came up billed as a solid defensive player, but on that play in the first and an error in the fourth, he seemed to be fighting himself. That changed with three stellar plays later in the game, including two after the Cardinals had taken the lead in the sixth.

“I was laughing after Jimmy [Rollins] hit the first ball right at him,” Westbrook said. “I thought, ‘Well, here we go.'”

Jackson’s family was at the game, which you certainly know if you watched the game on Fox Sports Midwest. The in-game interview with his parents showed both the pride and nerves that come from watching your son play his first big-league game.

And while Jackson didn’t get a hit, Allen Craig and Matt Holliday more than made up for that with three hits each.

Holliday hits? Yes. The sixth inning was big for the Cards, with Jon Jay leading off with a single and Craig hitting one off the top of the right field wall for a double. That brought up Matt Holliday — who promptly homered.

Craig and Holliday also were involved in the Cards fourth run of the evening, as Carlos Beltran drove in Craig after he and Holliday each singled to start the eighth.

In the battle for NL RBI lead, Beltran now has 82 to Holliday’s 79. Jason Kubel of the Diamondbacks is third with 77. (Really?)

Cardinals cruise? Obviously. Jason Motte nailed down the Cards victory with his 26th save, retiring the Phillies in order. That gave Jake Westbrook the win, his 12th of the season — which equals his total of last year — and his fifth straight W.

This afternoon, the Cardinals go for the win in the rubber game as Lance Lynn looks to get back on the winning track. And did you ever wonder why it’s called a “rubber game”? I did — and got my answer on Thursday. Game time is 12:35 p.m. Central.