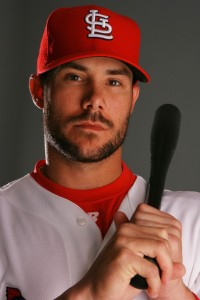 The St. Louis Cardinals offense is once again cold. Last night was the team’s second straight 2-1 loss, this time to the Pittsburgh Pirates.

The Cardinals have two runs and 10 hits in those two games, with Allen Craig and David Freese having six of those. Not even Jose Oquendo’s ejection last night over the horrible strike zone of home plate umpire Lance Barrett sparked anything on offense (although it is worth seeing again for the entertainment value).

Yet there’s a guy hitting .314 sitting on the bench — and a guy who’s started only four games this month. Skip Schumaker last played in a game on Tuesday and went two for four in the Cards 8-2 win.

Wednesday through Friday, Daniel Descalso has played second. He went two for four Wednesday, but is 0 for eight in the Cards  back-to-back 2-1 losses. He’s hitting .230 overall.

The subject of who should play second base has received plenty of attention lately — it was featured in the St. Louis Post-Dispatch’s Round Two yesterday and, not surprisingly, mentioned much on Twitter.

It was discussed on the Fox Sports Midwest post-game show as well, where an interesting graphic was presented. (Photo is from my TV, obviously.) 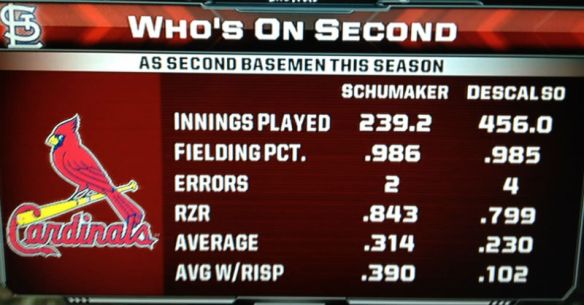 RZR is revised zone rating, a fielding stat on the proportion of balls hit into a fielder’s zone that he successfully converted into an out. And, of course, we all know what “Avg w/RISP” means — and can see those numbers.

During the post-game, Mike Matheny was asked if there were any spots toward the end of the game where he could have used Skip as a pinch-hitter. “Yep, yeah, he was ready to go,” Mike said, mentioning that he was saving Skip in case they got down to the pitcher’s spot. Any thought of pinch-hitting Skip in the seventh, when Descalso was up with Beltran and Freese on and no one out? “No.” Two more questions about Skip followed, with Mike saying “you are belaboring” to interrupt the final question.

One rationale on Twitter for not pinch-hitting Skip for Descalso in what ended up being the game’s final out was that Descalso is the third-string catcher and, with Yadier Molina out with back pain, DD needed to remain in the game. Mike was asked about that very situation — who would have come into the game if something had happened to Tony Cruz? “Most likely Yadi.”

(For as much as a probably intentional jerk Joe Strauss can be on Twitter, it is interesting to hear some of his questions live.)

Lost in all the discussion is another terrific start from Jake Westbrook. He allowed six hits in 7 2/3 innings, with three walks and three strikeouts. The two runs for Pittsburgh scored on a wild pitch and passed ball, as Jake and Tony Cruz seemed not in sync several times last night.

So the loss moved the Cardinals to two games back in the wild card race — the Braves and Pirates remain at the top, with the Dodgers 1 1/2 behind. This afternoon is a FOX game of the week starting at 3:05 p.m., with Erik Bedard and Lance Lynn starting.

And who will be at second base? We shall see …