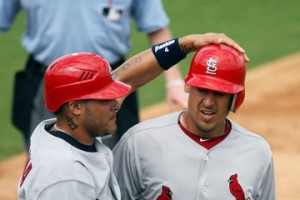 It was another “good, better, best” kind of game, with a brief bout of bad at the beginning. In the end, the six-run sixth inning made all the difference as the Cardinals beat the Reds 8-5.

Speaking of sixes, the Cardinals also moved up to that many games behind Cincinnati in the NL Central race.

But back to the brief bad — it was courtesy of Lance Lynn. He began the game as he has too many times lately, allowing two runs in the first (without getting Ryan Ludwick to ground into a double play it could have been worse) another run in the second and then two single to start the third to end his night.

Joe Kelly to the rescue … although it wasn’t always all that pretty.

He allowed a run to score in the third, charged to Lynn, plus made an error fielding a ball (and having that Baby Giraffe look again in doing so). He also gave up three consecutive hits in the fifth for another Reds run. In between, though, he struck out five consecutive Reds plus got Mat Latos to strike out with the bases loaded in the fifth.

Better? The rest of the bullpen.

Fernando Salas relieved Joe in the sixth, striking out the side. Edward Mujica, of course, got the seventh — two Ks and a ground out. Mitchell Boggs obviously was next and got a ground out, line out and K, though allowed a base runner after David Freese (and his sore wrist) made an error. Jason Motte made it interesting, deciding that a pattern of out-single-out-single-out would be a fun way to end the game. And he earned his 30th save for doing so.

You no doubt noticed a lot of strikeouts mentioned — 14 total on the night by the Cards pitchers.

The best of the game, of course, was the Cardinals sixth inning. And it all began with Carlos Beltran sliding headfirst into first for a single. After a Matt Holliday single, Allen Craig was Allen Craig — he launched a game-tying homer deep to center. Yadier Molina then hit one just into the first row of the right field bleachers, which at least gave the Reds fans something current to boo him about. After a walk to Freese and a single by Skip Schumaker — one of three he had for the night — Rafael Furcal drove in Freeser. Five runs without an out, and the first one drove in run No. 6 on a sacrifice fly by Matt Carpenter. Both Beltran and Holliday batted twice in the inning.

The Cards offense matched the strikeout total of the Cards pitchers with 14. Every starter had at least one hit, with Craig, Yadi and the already mentioned Skip having three each.

David Freese was hit in the left wrist during an at-bat, but stayed in the game. According to Derrick Goold in the Post-Dispatch, he didn’t have X-rays and will be evaluated today.

The Cardinals win obviously helps them in the Central race, but it also helped build their lead in the wild card standings as well. The victory was the Cardinals fourth in a row — while the Pirates lost their fourth straight last night, 6-5 to the Brewers. So much for the story that the momentum was all on Pittsburgh’s side after they won last Sunday’s 19 inning battle.

This afternoon the Cardinals and Reds are back at it at 3:05 p.m. Central of FOX. And now let’s all say a prayer: please, God, do not let Thom Brennaman be doing this game.