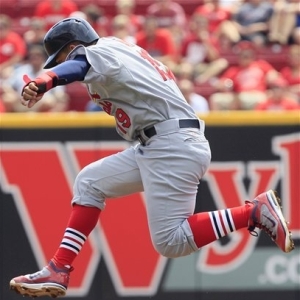 Most of us like the look of the high socks, right? It’s more traditional, plus avoids the typical (and unattractive) pants-covering-the-shoetops approach most guys wear.

Which is why the Twitter hashtag “#highsocksundays” — and subsequent participation by the Cardinals — is such a hit. Jon Jay, who is of course sporting them in this picture, even had t-shirts made as Joe Kelly showed us via Twitter on Saturday.

Participation is growing — there were more guys wearing them yesterday, including Carlos Beltran and even Mike Matheny, than the previous Sunday (which was good, considering the outcome of that day’s 19 inning game). However, two non-participants were the stars of the game.

Which just makes me wonder: will we ever see Matt Holliday and Allen Craig wearing high socks? Because, when you’re a homer shy of the cycle or have your second three-RBI game of the series, how much additional power can socks bring?

Yes, Mr. Holliday had quite the day on Sunday — two RBI singles, lead-off triple and an RBI double in the Cardinals 8-2 win over the Reds. So did Mr. Craig hitting right behind him, which resulted in Matt scoring on a home run and single.

With his four RBI, Holliday moved into the National League lead. He’s even starting to get some attention as an NL MVP possibility. And all without high socks. (Wearing the high sock t-shirt doesn’t count.)

Also not helping the high socks cause: Matt Carpenter, who had a double and two singles.

However Skip Schumaker, a participant, was two for four, and Jon Jay had a hit and an RBI. Beltran had a hit also.

Adam Wainwright also sported the socks and earned win No. 13, pitching 5 2/3 innings and allowing the two earned runs on six hits. Although there were no official errors, the defense was not its best behind him — two non-completed double plays in the sixth chased him from the game when the score became 5-2.

Yet that allowed the bullpen the chance to continue doing its thing successfully. Marc Rzepczynski reliever Wainwright with two runners on and got Jay Bruce to line out to Holliday in left. Edward Mujica continued his scoreless-as-a-Cardinal streak, allowing just a double to Scott Rolen in the seventh. Mitchell Boggs retired all three Reds he faced in the eighth. And Fernando Salas did the same to finish off the game in the ninth.

Yes, that’s Mike Matheny catching Fernando Salas. And if you look really close, you can see his high socks.

And Salas had an unusual warmup catcher when he came into the game: his high sock wearing manager. Derrick Goold explains:

After making a double switch to get Fernando Salas in to pitch the bottom of the ninth, Matheny had another question for home-plate umpire Brian Runge. Could he warm up the pitcher? Tony Cruz was getting his gear on and Matheny was available to get back in the crouch, where he spent all of his major-league career. He didn’t want warming up the pitcher to count as a visit and Runge gave him the OK.

The pitches “came in a little faster than I remember then,” Matheny said.

The win, of course, gave the Cardinals the series victory as well and cut the Reds division lead to six games. They also gained ground in the wild card race over the Dodgers (now 1 1/2 back) and Pirates (two back). And now they start a three-game series against the Pirates in Pittsburgh tonight.

Expected back in the lineup is David Freese, which is definitely good news after he was hit on the wrist during Saturday’s game. “There were no fractures found in the bones that make up the joint, and Freese was cleared to hit as aggressively as he could tolerate Sunday,” according to Derrick Goold.