No more Pedro Alvarez facing them! 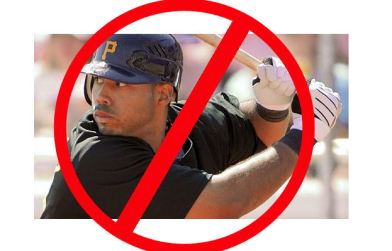 See, there is a bright side — however small — to the fact the Cardinals have been shut out since the sixth inning of Monday night’s game, which is 21 straight scoreless innings and counting.

And that obviously means two straight losses, giving the Pirates two consecutive wins and putting them right back in the wild card mix. (Not that they were necessarily out of it anyway.)

So now the record for this 10-game road trip is at 3-3, with perhaps the toughest four games still ahead. Did you expect any of this — hanging onto a playoff spot — would be easy?

Although who knows what Alvarez’s future holds down the road, as our pal Dathan wonders:

So, does this mean we can expect the #stlcards to acquire Alvarez in 2017? #Berkman #Beltran

So, yes, last night was a rough return to the starting rotation for Baby Giraffe Joe Kelly. He gave up all five runs to the Pirates — three on a blast by Alvarez — in five innings.

More plus side, though: the just-recalled Trevor Rosenthal. He pitched the remaining three innings and allowed just one hit — to the first man he faced in the bottom of the sixth. He also struck out three, including Pedro Alvarez. So his final 2012 at-bat was a strikeout. Progress!

The Cardinals bats were pretty quiet with only five singles on the night. Two each were from David Freese and Tony Cruz.

Speaking of Cruz, he was of course taking the place of Yadier Molina in the lineup. Yadi also said yesterday that the collision on Tuesday night by Josh Harrison was a “clean play” — read about that here from Jenifer Langosch and here from Rick Hummel.

Here’s hoping Yadi is back out there tonight, when the Cardinals begin a four-game series in Washington, D.C., against the Nationals. Game one features our old pal Edwin Jackson facing Jaime Garcia, starting at 6:05 p.m. Central Time.

Finally, congratulations to minor leaguer Chris Corrigan — he had a perfect game for the Palm Beach Cardinals last night, the first in team history.

Also, in news about other pitchers with the initials CC, here’s hoping this actually does happen. Because to a BAMF like him, having a rib surgically removed is obviously no big deal.