I heard a well-known sports reporter the other day reminiscing about the moment she realized she wanted to cover sports for a living. “Everybody wants to do this for a living,” her dad told her.

And while the “for a living” part is still a work in progress, the last few years of forging my way into the sports world have opened up some pretty cool opportunities. The most recent of which ranks right up near the top.

I’ve always been a Cardinals fan. It’s in my blood. My grandpa was a life-long fan, and was offered a walk-on contract back in the day. My dad picked up where he left off, raising me to adore the team, albeit from afar for most of my life. Recently, I learned that my cousin, in American Legion baseball several years ago, struck out the one-and-only Albert Pujols … twice (granted, before he was the Albert Pujols). 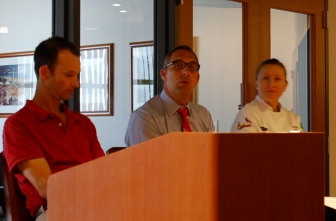 the Major League club and the local Minor League affiliate for Aerys Sports. And this past weekend, I realized yet again the privileges this job can afford.

Sunday afternoon, Chris and I sat in a room full of Cardinals bloggers, representing Aerys and AMF, and watched as John Mozeliak and Bill DeWitt III made their way to the front of the room. We were guests for the invite-only “Blogger Day,” hosted by the Cardinals.

It’s hard, sometimes, to separate being a fan and being a writer. You know, that whole “objectivity” thing. But in that moment, I didn’t care too much. We were in the room with the men who make our team tick. The ones who made the decisions that ultimately led to the unlikeliest of postseasons in 2011. The ones who said goodbye to Albert Pujols for the sake of the organization’s future, and who rewarded Yadier Molina with a contract he continues to prove he’s worthy of.

And they were there to talk to us. To answer our questions. To thank us for our dedication and efforts.

How could I not be a little in awe?

As Mo discussed — quite a bit more candidly than I’d expected — the recent woes of the 2012 team, and Mr. DeWitt shared the latest on the impending “Ballpark Village” project, we prepared to ask the questions most pressing on our minds regarding our beloved Cardinals. After all, who better to answer those questions than the men who call the shots at the top?

In answering the group’s questions, Mozeliak shared details on the new CBA, how the organization is going about scouting internationally, what his thoughts are on Mike Matheny’s first year managing, and the risk vs. reward of gambling with age and experience instead of youth and raw talent.

When I asked about his recent comments on Cardinal Nation’s lofty expectations of talented young players (read: Tyler Greene, Colby Rasmus), he began his response by quoting himself — “I believe my quote a month or two ago was ‘St. Louis demands to win.'” Through the wave of affirming chuckles, he continued to say, “I think that’s a great bar to chase.”

Chris ended the session with a question about selecting and maintaining Minor League affiliates — multiple player development contracts were up this year, and questions remained about what the Cardinals were going to pursue. Mo referenced the need for geographic proximity, high-quality facilities, and supportive fan bases to keep ties with a Minor League team. 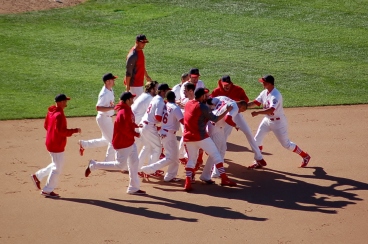 Sitting together, listening to “the powers that be” share their thoughts was kind of like seeing a celebrity out in public, or having a casual conversation with them — you realize that, no, they’re not just your favorite actor who plays your favorite character on that awesome show. But they’re a real person, too.

Instead of the press conference formality, we were spoken to as peers; instead of just some fans who take advantage of the anonymity of the internet, we were treated as a significant part of the larger social network of the Cardinals organization.

The United Cardinal Bloggers made a whole weekend out of the trip — an experience I missed out on last year. As a baseball fan, there’s not many things better than spending a weekend with so many like-minded people, talking baseball, chatting with the owner and GM of “our” team, and watching said team win in walk-off fashion against a division foe.

It was cool. Very cool. And the value of that opportunity was certainly not lost on us here at AMF.

Ron Watermon, Lindsey Weber, and the UCB gang — thanks for making the weekend one of those opportunities that makes this writing thing all the more worth it!