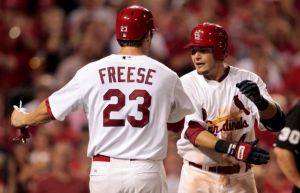 It’s not often that something happens for the first time ever in St. Louis Cardinals history, given the team has been around for more than 100 years. Yet never before have the Cardinals had five players hit 20 or more home runs in a season — until now.

David Freese achieved that feat in the second inning, with a two-run homer to put the Cards up on the Houston Astros. Check it out here.

Then, in the fourth, Yadier Molina had a solo blast for his 20th homer of the season — see it too. He becomes just the second catcher in Cardinals history with 20 homers in a season, joining Ted Simmons.

In addition to that slugging, the Cardinals also scored twice more in the bottom of the eighth for a 5-0 shutout. Holliday singled in Jon Jay, while Craig hit a sac fly that scored Beltran.

Then there was the pitching.

Lance Lynn had his second straight terrific outing in his return to the starting rotation, which definitely is welcome. Lynn went 6 1/3 innings and allowed only three hits, striking out five and walking two. He’s only allowed one earned run in 12 1/3 innings since starting again, plus has now won three straight decisions. He has 16 wins on the season.

Following Wolf Pup was Edward Mujica, who got the remaining two outs in the seventh, and Mitchell Boggs, who struck out the side in the eighth.

Joe Kelly came into pitch the ninth, and things got a little interesting with a couple of singles and an error by Freese loading the bases with only one out. But there was Jason Motte for the rescue, and his 37th save, as he quickly got two strikeouts.

The win combined with the double-header split by the Dodgers yesterday means the Cards gained a half-game in the wild card standings. The Dodgers are now two back, while the Brewers are 2 1/2 back. The Phillies are four back and the Pirates — who are now 74-74 — are 4 1/2 back.

This afternoon the Cardinals go for the sweep at 12:45 p.m. with Jaime Garcia facing Bud Norris.

Then, of course, it’s off to Chicago for Carp Day at Wrigley Field tomorrow. And, if you were wondering just what happened to the rib he had removed, yes, it’s still around. (Love the idea of the “Rally Rib” too.)

Wondering what was going on a year ago today in the Cardinals wild card chase? Ryan Theriot was a hero, Adron Chambers made an impressive major league debut and the Cardinals moved to 4 1/2 back in the wild card race. Which, as we saw above, is where the Pirates are today. Somehow I don’t see a miraculous comeback in their future, though. And would someone please stop the Brewers?