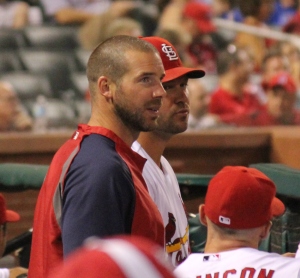 Let’s all take a deep breath.

Yes, for the most part, last night’s Cardinals-Astros game was ugly.

That Astros Pitcher was back to his magical self again after losing three straight games to the Cards this season, shutting them down on just two hits while striking out seven.

But excelling against St. Louis is what That Astros Pitcher has built his Cardinals killer reputation on, this season’s results until now to the contrary. There’s no explaining the phenomenon; it just is. It’s also what’s earned That Pitcher a co-starring role along with Pedro Alvarez and Bryan LaHair in our upcoming “The Power of Cutch” video starring, obviously, Andrew McCutchen.

But, in case you didn’t notice with all the tributes to That Astros Pitcher being broadcast and tweeted, the Cardinals pitching was just about as good.

Not quite the same, given that the Astros won the game 2-0, but Chris Carpenter was better in his second start.

He again had one shaky inning, the fourth, when Jose Altuve led off with a homer. Two more hits, and some interesting defensive plays, allowed the second run to score. He only allowed one other hit, walked none and struck out three (including Scott Moore on a rewind-the-DVR worthy cutter in the first) and threw 92 pitches in six innings. Marc Rzepczynski (remember him??) followed, giving up one hit, and Shelby Miller pitched a one-two-three eighth.

And that was that.

If you want to be a nice and sentimental baseball fan, you can be okay the Astros won their final National League home game. A bright spot for their fans is a rarity this season.

If you don’t give a damn and just want to be pissy, it’s your right as well. Bad game, for sure, especially when a pitcher so completely dominates the Cardinals offense. But just one game — and one that was the conclusion to a 4-2 road trip.

Of course it hurts to lose on a night when both the Dodgers and the Brewers won — and hurts even more since there’s no game today so there’s plenty of time to dwell on last night.

The Cardinals have six left to play. Their lead for the second wild card spot is 3 1/2 games. The Nationals come to St. Louis now, still trying to wrap up the National League East championship even thought they’ve already clinched a playoff spot. So the weekend is big.

But the Cardinals are still in control of the second wild card, still in charge of their own fate when it comes to playing on Oct. 5.

It’s guaranteed to be an interesting week ahead.

3 thoughts on “Yes, That Astros Pitcher Beat The Cardinals Again”