Game three of a five-game series is always a big deal. It’s an even bigger deal with the series tied at 1-1. And even bigger, still, on the road.

Here are three things you should know about today’s Game 3 in Washington D.C.

Some call him “Darth Carp.” I call him Classic Carp. Chris Carpenter, who had only pitched 17 innings in the 2012 regular season (after coming back from that little surgery thing where they removed a rib …) pitched 5 2/3 shutout innings, giving up seven hits, two walks, and striking out two.

No, it’s still not quite the complete game shutout of last year’s postseason, but more than enough today.

Pete Kozma. Yep, that guy we all complained about starting over Ryan Jackson. The guy who hit two homers in two days against the Cubs at the end of the regular season. The guy who was at the center of that silly infield fly rule debate, as well as the error that helped give up Game 1 against the Nationals just a few days ago.

That guy is fast becoming “that guy.” The guy who can be the nail in the coffin … and it comes out of nowhere. Minor League stats don’t matter in the Bigs, and Petey is becoming the perfect example.

Maybe he’s like that kind who nearly flunks out of high school but goes to college and excels: maybe he was just bored! 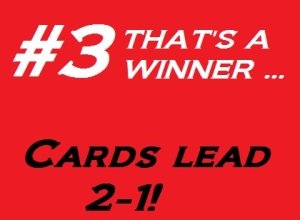 More on Game 3 and the offensive explosion tomorrow!