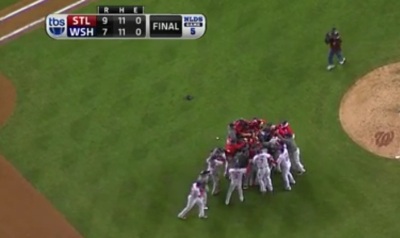 [Screen Cap] The St. Louis Cardinals celebrate their victory after defeating the Washington Nationals, 9-7, in Game 5 of the NLDS.

The Cardinals had the biggest come back in NLDS history to defeat the Washington Nationals 9-7.

Let’s talk a little about this game! THIS AMAZING GAME!

* Dirty Dan Descalso and Pete Kozma. These two scrappy guys were the heroes of the ninth inning. Dirty singled to short and allowed Beltran and pinch runner Adron Chambers to score. The score was tied up at 7 all. Next up, Pete hit a single to right field to score Freesey and Dirty. The Cards take the lead 9-7!

Can you believe it! No. Me either!

* Adam Wainwright. He really did not pitch well at all. It was quite disappointing. He pitched 2.1 innings, giving up seven hits including three homers and six earned runs. He did manage to strike out 5.

I still can’t believe it … but the Cardinals take on the San Francisco Giants in the NLCS starting Sunday! GO CARDS!

2 thoughts on “Game 5 At A Glance: Did That Just Happen? AGAIN!”