I’m generally pretty calm. Not about baseball, but life in general. I don’t get all crazy and worked up about too many things. But baseball … baseball’s a different story. Especially playoff baseball. And even more especially when these crazy, Comeback Cards are a part of the story.

Last night, as the Cardinals jumped out to an early lead over the Giants, I did something I rarely do — I took notes. They were more like reactions, but nevertheless, it’s entertaining now to read from beginning to end and see the roller coaster emotions the Playoffs bring out. 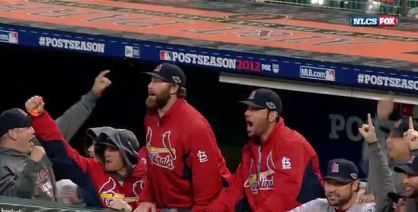 Trust me, they were on the same roller coaster we all were! [screen cap]

I can’t lie, Lynn on the mound makes me nervous. Not because of his stuff, per se, but because of how long he’ll be able to keep it going. Here’s hoping Wolf Pup brings his A-game … and so does the offense behind him.

Also, it’s pretty cool seeing the 2010 champs against the 2011 champs — the first time in LCS play that the last two World Series winners have met! That means, no matter the “on-paper match up,” this series is going to be a fight. Which makes Game 1 even more significant!

Patience, Iago. I mean Jay. But seriously. At least Holliday made Mr. Bumgarner throw a few extra pitches. Only a few, though.

A scoreless inning is good, Wolf Pup. Just … keep some of those pitches down, ok?

Some hard-hit Bumgarner pitches. Then again, he’s thrown some really good ones, too.

Is it just me, or does David Freese just look dramatically more comfortable in the postseason? …nope, it’s not just me. Bombs away, Freesey!

Great start, though. Love getting those runs up early … and often!

Nice to see the defense flashing the leather early! In this park, that could come in quite handy. And Lynn will appreciate some of those nifty plays. Keeping runners off base = good strategy!

Again, Matty Ho making “Mad Bum” (as long as we’re going with nicknames, a la the Fox broadcast) pitch, and it pays off with another base hit. Well, look at THAT stolen base! Holliday just wanted to prove that he isn’t as banged up as some experts thought.

And according to Joe Buck on Yadi’s liner to center, “That’s where baseballs go to die.”

So, we can cross “scoring in every inning” off the goal list for tonight’s game.

The strike zone is a little all over the place so far. Outside, low, high … as long as it stays ginormous, everyone can adjust accordingly.

OH goodness. I know Pete Kozma’s probably a little hesitant to back off (if that makes sense) because of the infamous dropped infield-fly situation, but that pop up to David Freese was enough like the one in Game 6 anyway. No need to make it more interesting than necessary!

Hello, Chris Carpenter. Nice to hear from you. “Distractions are no match for Darth Carp.”

Boy, some aggressive base running early on. Look at Koz go! Nice, smart baseball right there. And the stolen base pays off!

YES. But, let’s not get cocky, here. We were on the other side of that score on Saturday. Keep shutting ’em down, Lance.

There’s a Brandon Belt bloop over second base.

Lance. SETTLE. Limit the damage and get right back on track.

Or not. Two more runs in. I was afraid of the “wheels fall off” inning for Lynn. This is it. I was hoping for one more inning. Please tell me Joe Kelly is speedily warming in the ‘pen.

All this with two outs. NOW Kelly is up.

Well, 36 pitches later, Lynn’s night is done. Finally. Not sure the thought there, Mike Matheny. Giving back nearly all of that 6-0 lead isn’t the greatest of game plans.

One pitch, one out, thanks to Dirty Dan making a diving play to stop the grounder and flip it to second for the out.

Please and thank you.

Welcome to the game, Tim Lincecum. Do not hit Allen Craig, please. Walking him, though, is just fine.

Wow. So much for a consistent strike zone. And there it is. The dreaded GIDP.

And the Giants pick up right where they left off. Lead off single.

I’m sorry, did they just say Rzepczynski warming in the pen? Oh boy. It’s the 5th inning, Mike. Don’t go there yet. Give Kelly a minute to get comfortable.

Kelly vs. Posey. Tying run at the plate. Buckle up, kids. This series is going to be wild.

Boy, Pence went after that. But, popped up to Holliday.

You’ve got to be kidding me. Two on, two out in the fifth inning and you’re pulling Kelly for Scrabble? Mike … come on, now.

Well, it worked (breathe!). I’m sure the theory is to simply bridge the gap to get to Mujica/Boggs/Motte anyway.

Nothing in the postseason is easy!

Now it’s San Fran with the defense. Impressive. Apparently insurance runs would make this too simple.

Trevor Rosenthal, eh? I’m glad we’ve used both longer relievers on the same night. Sure, short outings. They can pitch again tomorrow. But this seems like a Matheny move based on what he wanted to happen, as opposed to what actually did.

Not gonna lie, those were two HUGE strikeouts for San Fran. Still a two-run game.

Boggs time. Let’s make this as nice and tidy as part one, shall we?

That’ll do, Boggsy. That’ll do. (She said with an exceptional “Shrek the Ogre” brogue.)

Kozma the creative goes with the slap-bunt attempt? Interesting. Too bad it was foul.

But not before some drama. Of course. Angel Pagan’s base hit *just* under Descalso’s glove.

Grounder to first, bobbled by Craig, looks up for the flip *just* in time!

Matheny loves that three-part plan. I wasn’t buying his method of getting there tonight (ahem … via Scrabble), but once he did, Mujica/Boggs/Motte did precisely what they are there to do. Bravo, sirs!

Nothing in the Postseason is easy. Why would Game 1 of the NLCS be? Between the early power from Beltran and Freese, and the shutdown work by the bullpen, we have a Game 1 winner, 6-4 over the Giants.

That’s a good start. Now, let’s do it again today, and head on home to St. Louis!