It isn’t fun when the magic runs out.

It’s even harder when, in reality, there shouldn’t have been much need for magic. At least not right at the end.

Especially when you do have a little magic on your side. 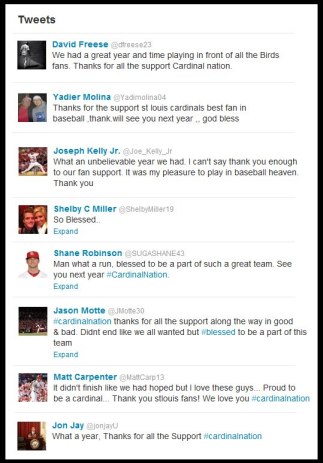 But, to quote one of my current TV obsessions, “All magic comes with a price.”

The 2012 Cardinals entered the season with the experience — and the weight — of the 2011 World Series whirlwind hovering over their every move. And while we all knew there were slimmer than slim chances for anything to ever live up to last year, we still wanted the same outcome, likely or not.

Last year’s magic led us all to believe that in a “backs-against-the-wall” situation, the Cardinals were bound to win. It’s just what they do. It’s who they’d become. And they did a good job of confirming those expectations in September and October.

Just when we thought for sure they were down and out, too far behind the Braves and the Pirates for that new, second wild card birth,  MAGIC.

Just when the Braves thought they had their revenge in the bag, MAGIC.

Just when the Nationals had the Cardinals right where they wanted them — down 6-0, then down 7-5, then to their last out — five different times, mind you …

Things just seemed to click when these Cardinals — much like the 2011 Cardinals — had no other choice but to win. After that miraculous Game 5 NLDS win, the Cardinals took to the Giants (another team not unfamiliar with a little October magic), and came out with a 3-1 series lead.

One game. Just one win would send them right back to the World Series. Even a Cardinals team sans-magic could muster that … right?

Did they get complacent? Just stop trying? Buy into the “they can’t actually die” hype?

Were they simply overpowered? Should they really have even been there in the first place?

What blame is placed where? And how could the story possibly end this way?

Maybe the magic ran out. But maybe, the Cardinals had a price to pay for all that magic they’d used already. Either way, all that built up hope, thanks to the many magical moments of the last few seasons, came crashing down.

The higher the expectations, it seems, the harder the fall.

As if being the defending champions doesn’t add enough pressure, let’s throw in an offense that redefined “inconsistent” this season. Mostly, there were good numbers. Often, there were terrible outcomes. How the two types of statistical analysis coexist, I’m still not quite sure.

Then, let’s give a rookie manager the challenge of incorporating a handful of talented rookies into a organization with sometimes unbearable expectations of success (examples: Brendan Ryan, Colby Rasmus and Tyler Greene). Add to that a starting rotation that went from rock-solid to barely-useful, and defense that couldn’t mask the holes any longer.

And on top of it all, there’s that propensity for finding a little magic at just the right time.

Monday night (and, in reality, the previous two games), there was none. Last year’s Cardinals got stronger with every “impossible,” unpredictable, inexplicable win. This year’s Cardinals were knocked out by a Game 5 loss that sent the momentum spinning off a cliff.

We all know the narrative by now. The team that had seemed to be squeezing unheard of production out of guys like Pete Kozma and Daniel Descalso couldn’t find even a drip of production at all. Two runs in three games. No starter going more than four innings. Four errors. Seven unearned runs. Hitting just 1-for-21 with runners in scoring position.

So, Cardinal Nation — players included, who had become so used to winning it against all odds — saw the weight of the world finally become too much.

Or, the Giants are just really good.

But, you know, we have a lot to be thankful for as Cardinals fans, and even more to look forward too next season.

How many talented rookies did we get to see this year? Lance Lynn, Joe Kelly, Barret Browning, Trevor Rosenthal, Shelby Miller, Matt Adams, Ryan Jackson (although, we saw precious little of him!).

How about Carlos Beltran pulling a Lance Berkman and letting the St. Louis baseball community revitalize his playing career?

The post-La Russa/Pujols/Duncan era began with a bang, and Mike Matheny took his team to the playoffs in his first season.

Matt Carpenter proved his value in a lineup … and so did Allen Craig.

And of course there’s Yadier Molina. Thank goodness he signed that contract early and didn’t drag that storyline on and on. Oh, and he had a pretty stellar year, too.

Adam Wainwright was back. Chris Carpenter came back.

And, despite all the on-paper reasons these guys shouldn’t have been a success, our Cardinals were one game away from the World Series.

Just imagine what they can do in a good year when, if the magic runs out, they can still survive.

A 3-1 collapse is hard to take. But a future as bright as these birds have can make the sting short(er)-lived.