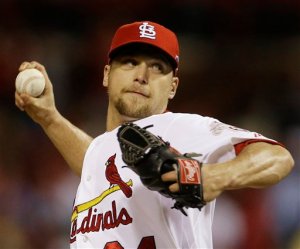 NOTE: Now that the off-season is officially here (does it make you feel better about the NLCS since the Giants swept the Tigers?), look for our Cardinal Love Letters every Monday.

What a whirlwind of a year, right? Wow.

After making the jump from the Quad Cities River Bandits last year to the Springfield Cardinals at the beginning of 2012, you leaped right up to the big Cardinals and ultimately stuck around. (Guess 100 mph fastballs will tend to do that.) And now, given your successful October outings, everyone knows who you are — even writers from the New York Times.

I almost felt like a proud mom watching you this year, especially during those in-your-face close-ups on FOX during the NLCS — it was a big change after seeing you from the stands at Modern Woodmen Park throughout 2011. I did write about watching you and the rest of the Bandits sweeping your way to the Midwest League Championship at the time. And I wrote about you as a Bandit this September too, after the Cardinals broke my heart by deciding to move their Midwest League team to Peoria. Last June I watched a Bandits game with Jeff Luhnow, who told me you were one of the Bandits to keep an eye on. Guess he knows a little something, huh?

Your major league debut in July was something I could only listen to on the radio — I was with a co-worker driving back from a business trip to Kansas City, listening to the game from Milwaukee on my phone. We were somewhere south of Des Moines when you pitched in the eighth inning. Thankfully my co-worker is a huge baseball nut, although a Cubs fan, but he too remembered watching you here last year. So we enjoyed hearing your successful first inning as a big leaguer, even if the game itself was a disappointment. (Well, not to the Cub fan.)

So I was thankful when I was actually able to watch you pitch in that crazy game against the Cubs a few days later, although you didn’t make it into my poem about the 12-run inning. And it was terrific to see you pitch in person on Sept. 8 in St. Louis — just like last year at a Bandits game, except there was at least 10 times the crowd plus my seat at Busch Stadium was equivalent to being on top of the press box roof at Modern Woodmen Park.

You’ve had my admiration all along, going back to 2011 — your Bandits team is one of my all-time favorites from all the years I’ve been going to games in the Quad Cities, just because you were such a terrific bunch of kids led by a great manager in Johnny Rodriguez. But it was this October when I became all that more proud to have “known” you back when.

To see the way you blossomed on the big stage, in the brightest of spotlights, was tremendous. You were always so poised no matter what situation you faced when you entered the game. And now that everyone knows who you are and what you’re capable of and that you’re not related to Ken Rosenthal, I still feel a bit of motherly-like pride … especially since, at your age, you could easily be my son.

I’m so looking forward to next spring training and the 2013 season and beyond, to watch how you’ll further develop and to see you start again like I had the chance to do in Davenport. I’m sure I’ll always feel the special bond toward you like I also do toward Joe Kelly and Matt Adams and Shelby Miller — all you kids who I had the chance to see so recently as River Bandits. And especially you, making that jump so quickly.

All the best in this off-season. It’s awesome that you’ll be working out with Chris Carpenter — he certainly seems to have much wisdom to share, and would be a terrific motivator.

I look forward to seeing you again at Busch Stadium next season!