Much has been said, written, debated, and explained about Mike Matheny in his first year as manager of the Cardinals.I’ve been hesitant to cast my judgement, because there were certainly more than enough extenuating circumstances to make the 2012 season difficult for any manager. What exactly is the appropriate measuring stick for a past Cardinal hero as he follows in the footsteps of a World Championship team, a Hall of Fame manager, and a legacy that creates unusually high expectations?

If we base his value on how far the team played into October, I’d have to call it a success — not based on how the season ended, but by how many other managers would have loved to be in Matheny’s shoes. 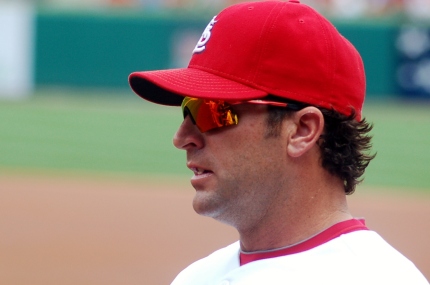 If we base his success on how the players performed … well, good luck with coming up with and answer for that! There were high highs, and low lows that made for a frustratingly inconsistent year.

I, however, think his value should be judged by what he brought to the team: exactly the character and leadership abilities that he was hired for.

It was those abilities — the “intangibles” that are hard to quantify — that rallied a team with more obstacles to overcome than I even want to count. No, his decision making wasn’t always grand. But if you recall, there were plenty in Cardinal Nation who questioned Tony La Russa’s sanity night after night, even when the team was winning. The decision making skills, the strategy, the flexibility, the gut instinct … those things will develop. I’m sure of it. Anyone who saw how hard Matheny took every single loss, and how often he didn’t make the same mistake twice (bunting aside…) can expect progress in the in-game management department for 2013.

But, as I looked back at Matheny’s debut season, it was a matter of  moments, not milestones, that stood out.

I mentioned this play — and Matheny’s involvement in it — in Monday’s Love Letter to Joe Kelly. But that was about Joe. This is about Mike.

Sure, I may be biased because I was there, and I saw angry Mike (as angry as Mike can get!) right in front of me. But, even more than that, this was the first time we saw that kind of fire. Plus, it was in defense of a rookie pitcher — a kid who learned fast that his manager had his back.

(He got a little better at the arguing thing as the season went along, too.)

Perhaps one of Matheny’s greatest successes this year was the integration of old and new — young talent, and grizzled veterans. All too often, this team was in a situation where they needed someone to step up. Inevitably, someone did. Whether it was Matt Carpenter, Jon Jay, Daniel Descalso, or even Pete Kozma, the young guys played their part. None, though, quite as impressively as Trevor Rosenthal.

When a guy with as much talent as Trevor has comes to the Bigs, fans tend to either get overly excited or be overly cautious. When a guy like Trevor jumps from Double A straight to St. Louis, those reactions are even more exaggerated. But, circumstances created the opportunity. And, much like Matheny was able to do with the position players, he got the best out of Rosenthal when it counted.

Sure, some of us would have liked to see Trevor used even more, but to keep him around for October, and without hesitation put him in the line of fire showed a lot of nerve, and more importantly, trust.

Just think this through. You’re a rookie manager. Brand-spankin’ new at this thing. Your ace goes down in Spring Training with an injury that may or may not be treatable. Then, just weeks before the end of the regular season, that very same ace says he’s good to go. You know, after he has a rib removed to alleviate the pinched nerve causing the neck/shoulder/back problems.

Ok, cool. Wait … is this really a good idea?

2. The Carpenter dilemma, part one

Since we’re working backwards, this actually happened before the previous moment.  But, really, this was one of the critical moments of Matheny’s rookie season. When Carp went down in the spring, he had to keep it together, much like the previous manager the previous year with that other ace, Adam Wainwright.

It’s moments like that — losing a key piece of your winning puzzle — that could sink a team. No, no one expected them to say, “That’s it. Our season’s over. Without Carp, there’s no hope. We might as well just go home.” But, they could have been rattled. Significantly. And yet, there was not only resolve in Matheny’s voice, but confidence in his actions. He carried on (and convinced the team to do the same) as if this was a mere bump in the road to their ultimate success.

That was, really, our first taste of how this new guy could — and would have to — handle adversity.

1. No, thank YOU, Lance Berkman

It’s the last home game of the regular season. It’s against the Reds. The Cardinals are headed to a one-game playoff with the Braves.

Bottom of the seventh, scoreless game, one on, two outs.

Everything that Lance Berkman meant to the 2011 Cardinals, all the joy he brought to the fans, and more importantly to the clubhouse, all the moments he created for Cardinal Nation on the way to the World Series ring he’d so long desired … he deserved one last moment of his own.

After a season robbed by injuries, and a future as uncertain as the playoff picture, The Puma got one last chance in front of the adopted home crowd, not because he wanted it, but because his new manager understood the value of that moment and insisted.

What are your top Matheny moments? Feel free to share in the comments!

2 thoughts on “Looking Back: Matheny Moments”