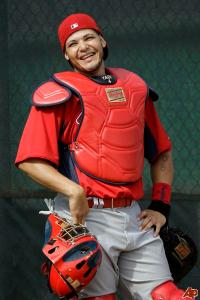 Looking at all the love letters that Tara, Miranda, Ann and I have done since AMF began in January 2011, how is it possible none of us has written one to you? It’s seriously embarrassing, because obviously we all adore you. Every Cardinals fan adores you.

How can anyone not adore you? Well, except for Mets fans. I’ll get to that …

It’s interesting to look at the box score for your major league debut. Honestly, I don’t remember this game — it was in Pittsburgh on June 3, 2004, but it was a nice win and you had hits No. 1 and 2 for your career, plus your first run scored (on a Woody Williams sac fly, no less!)

What I remember most about those early years of your career was your incredible defense, throwing out runners trying to steal second, of course, but also those amazing snap throws down to That Guy Who Used to Play First Base to pick guys off.

There’s video of one of those throws here, getting Ricky Weeks. It seems very ironic that a video MLB describes as “Yadier Molina’s solid defensive play in the 2008 season earns him his first catching Gold Glove Award” includes no throws to second — but perhaps those are just so standard, and were five seasons ago too, that no visual evidence is needed. (One other comment on that video: Ted Lilly?)

That defensive prowess you’ve shown from the very beginning has just continued to shine. Your Gold Glove collection has now increased to five, the Platinum Glove collection just grew to two, you have four of the first five Fielding Bible Awards ever given (with a unanimous score again this year) — all very well deserved. And no matter how much guys like Ted Lilly in 2008 or Josh Harrison this year might want to barrel you over and take you out, you hang tough no matter what. Of course you do — you’re the very definition of BAMF.

Especially this year. Because there’s nothing more pleasing than seeing you blossom into such a complete player.

Yes, we know that you had standout moments on offense at times earlier in your career. None of us will ever forget this ninth inning moment from Game Seven of the 2006 NLCS at Shea Stadium. Such a terrific moment from, at the time, an unexpected guy. My favorite part of the clip is how silent the crowd is. And my favorite thing that remains from the game is the Mets fans still booing you in New York. I had the chance to experience it when I was at Shea for a game in 2008, and it cracks me up. The fact they now do it six years later is awesome.

In 2011, it was great to see your power at the plate increase as you set career highs in homers and RBI. That should have prepared us for this year’s offensive outburst, which was absolutely enjoyable all around. It was more than enough to make you the obvious choice of our Cardinal of the year for 2012. All the career highs — batting average, on-base percentage, slugging percentage, hits, runs scored, RBI, homers and (yay!) stolen bases. Your 1,000 career hit … on an infield single. An All-Star for the fourth straight year.

And one of five finalists for the National League Most Valuable Player.

Yadi, you are the Cardinals MVP for sure — and certainly a more valuable catcher than the other one up for the National League award. You do more, day in and day out, to benefit the team than any other Cardinal and really came into your own this season. (Probably not a coincidence your emergence came after That Guy Who Used to Play First Base left and you had the chance to step up …) You are the heart and soul of the Cardinals, the never-let-anything-stop-you guy who just gives all he has and does what it takes.

Which is also why it’s still embarrassing this is the first love letter we’ve done to you.

I am so, so glad you signed that contract extension. Because I can’t wait to see how you continue to emerge as a dominant force in the National League overall.

Yadi, have a relaxing and enjoyable off-season. I can’t wait to see you back out there in February.