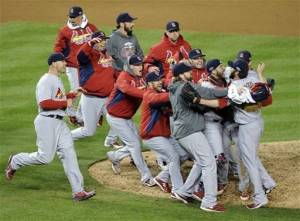 As 2012 winds down, it’s only natural to take a look back at some of the posts we wrote this year — and there were plenty to choose from since this is No. 449.

Remember that time in January when Roy Oswalt was going to be a Cardinal?

“Opening Day” are two more magic words for Cardinals fans — and this year’s home opener was extra special. Forget the rain and just focus on the great pictures … or some gushiness about the whole experience.

Lance Berkman, we are going to miss you for so many reasons. April Fool’s Day gave us one reason. Then May’s pink tux, and tacky tux day overall, was another. (This post on the tuxes was a favorite too.)

Then there was the no-hitter-that-really-wasn’t.

Since we all need a laugh after that, see how far you can get into this June update on our namesake Aaron Miles without literally LOLing. (Sadly, that booty poetry feature never did take off — although Michael definitely gets points for his version of “Aaron’s Got Back.”) And, just days later, we heard from the real Aaron when he joined Twitter (though his stay appears to be short-lived). Right after that, he announced his retirement from baseball.

After a rough May, the starting pitching finally got back on track in June with terrific starts from Kyle Lohse, Lance Lynn and Jake Westbrook plus Joe Kelly made his major league debut. Then, on a Monday night in Miami, Joe played a big role in one of the most memorable games of the year — by pinch-hitting. (Oh, Tyler Greene … we don’t miss you one bit.)

June also brought about the somber 10-year anniversaries of the deaths of Jack Buck and Darryl Kile, and I wrote about the final inning Darryl ever pitched.

July brought more poetry to Aaron Miles’ Fastball — like this sonnet to mark Barret Browning’s big-league debut at age 27 and six years in the minors.

Remember the craziness of the #FreesePlease All-Star voting on Twitter, before Tony La Russa’s All-Star finale was a win?

No comment is really needed … although that stay off the DL was unfortunately short-lived.

Ah, that 12-run inning against the Cubs … it just begged for more poetry.

Tara began the “Bandits Buzz” series in late July and spotlighted several of the Quad Cities River Bandits: Casey Rasmus, Stephen Piscotty, Tyrell Jenkins, Matt Williams, Nick Martini, Colin Walsh and manager Luis Aguayo. (And then the Cardinals broke our hearts in September by announcing the move of their Midwest League team to Peoria starting in 2013, but at least left us with plenty of memories.)

Most everyone’s predictions from Aug. 21 did actually happen.

Remember all the dugout dancing? And the other fun Adam Wainwright had in the dugout? (And out on the pitcher’s mound too?)

In addition to the Baby Giraffe Joe Kelly, 2012 saw the big league debuts of Trevor Rosenthal and his 100 mph fastball, after spending 2011 in the Quad Cities, and Shelby Miller, who had a tremendous first start on the final day of the regular season (which also included a final, surprise appearance by LB).

And then there was Pete Kozma …

Yadi, we love you.

The postseason brought about the memorable wild card playoff game, then the NLDS against the Washington Nationals. Chris Carpenter won his only game of the year but our biggest memory of the year, of course, is Game Five and the ninth inning comeback. Daniel Descalso! Pete Kozma! Relive the magic!

After that it was onto the NLCS and the San Francisco Giants, which was fun to start with and not-so-fun in Game Two. But Games Three and Four at Busch Stadium were terrific. The picture here pretty much sums up how we felt about Games Five through Seven, although — to look at the bright side — the Cardinals did get to within one game of returning to the World Series.

And we were already looking forward to 2013 at the end of October.

November brought well deserved recognition for Yadi with a variety of awards, including finishing a close fourth in the NL MVP race. (Did you really think I could resist linking to that Photoshop of Ryan Braun and his gigantic head one more time?)

Now we’re in the midst of a relatively quiet off-season, although we said good-bye to Skip Schumaker as he was traded to the Dodgers.

The calendar turning to 2013 is definitely one step closer to baseball’s return, and I’m sure you’ll agree that it can’t get here soon enough.

Thanks again for all your support in 2012! Here’s to another great year ahead.