The start of a new year naturally leads us to reflect on the last one. Chris collected a lot of our greatest memories from 2012, but that, in turn, tends to get me thinking about the coming year. Before we know it (and yet not as soon as we’d all like!), pitchers and catchers will be headed to Jupiter. Shortly after that, we’ll get our first taste of the latest edition of our Cardinals, and begin to develop ideas and opinions on the season ahead.

We’ve been pretty fortunate the last few years to have exiting and successful late-season runs. But this year, I’m selfishly hoping for a little different route to the postseason. (But, I’ll gladly take it however it comes!) 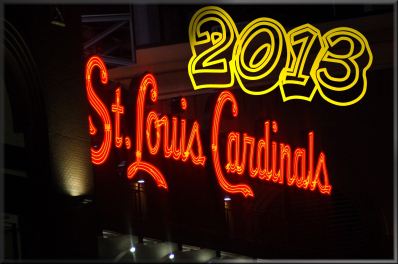 However things play out, though, I’m just ready for baseball to be back.

And with my mind geared up to look ahead, I’ve come up with the top 13 things I’m most excited about for the 2013 season.

I probably could have just said, “ballpark eats.” But, after the food we ate at UCB Weekend, those bacon-wrapped dogs were sensational, I must say. There’s nothing like a good hot dog on a summer night at Busch. And you can never go wrong with bacon!

I thought “High sock Sundays” were a pretty great treat. I know there are people who aren’t fond of the Cardinals adding an alternate jersey this year, or their plans to wear it once a week, but Jon Jay made an excellent suggestion when he tweeted about wearing high socks on Saturdays to complete the throwback look. I’m totally okay with this. In fact, I’m pretty excited about it.

The last few years, it’s turned into a bit of a trend. Mid-season struggles have John Mozeliak searching for the perfect solution. Nothing all too dramatic, but enough of a shake up to get the team over the hump. While I hope the circumstances are a bit less imminent, I find myself quite curious to see what dear old Mo has up his sleeve this time around.

10. The battle grounds of spring

This off season has been notably quite. Compared to last January, there’s far less room for speculation or debate … at least on headline-making issues. However, the position battles that will take place this spring are fascinating in their own right. Does second base belong to Daniel Descalso? What young flame-thrower gets left out of the pitching puzzle to start the season? And will any of last year’s Minor League standouts shock us all by playing their way into the Bigs?

9. The battle for the NL Central

Maybe I’m just getting a little greedy. The Wild Card has been awfully good to us, I know. But I really do like the idea of taking back that NL Central crown. The Reds look like they’ll be tough. But I’m pumped about the idea of starting back at 0-0 with the chance to end the regular season a little early as division champs.

Every season has ’em. Last year, we had the pleasure of seeing Trevor Rosenthal go from some talented AA-ball pitcher to a Major League force, almost overnight. But, there was also Joe Kelly — a guy hardly talked about in the shadow of Shelby Miller to start the year — who stepped in and stepped up, time and time again. Or how about Lance Lynn in that All-Star first half? Or my buddy, Pete Kozma and his 15 minutes of fame? You just never know who it will be this time around. And I love that.

Each season, there seems to be one guy in particular that really comes into his own. Sometimes, he even defies the odds (or at least the “experts”) in doing so. Last year, Jon Jay was that guy. Despite dealing with injuries here and there, we learned just how capable he is of covering center field … and a LOT of it. He had quite the highlight reel at the end of the year, and I can’t wait for more.

You can look at last season one of two ways: Mike Matheny had an easy debut by being handed a team that was pretty well functional on its own. Or, Mike Matheny had the nearly-impossible task of stepping in to an unfamiliar position, in an organization with a legacy of winning, with a team that had just experienced the highest of highs, and a fan base eager to live it all over again. Either way, it had to be exhausting. But, I have no doubt that Matheny, the student of the game that he is, learned lessons of epic proportions. Lessons that he will be ready to put to use. I’m quite interested to see how he improves his own performance in his second season at the helm.

At the beginning of 2011, no one would have guessed Allen Craig would be one of the heroes of the World Series. And then, at the beginning of 2012, that hero was out of commission. When he came back, though, boy did he come back with a vengeance. I already have my fingers and toes crossed that we get to see the “Amazing Whacker Guy” play out a full, healthy season, in which we see the full potential of that hard-hitting bat of his.

Ahh, that beautiful sound when Mike Shannon realizes something good might be happening and yells, “Get up, baby! Get up!” followed by an “Ohhhh, YES!” I hope to hear it 30 times or so, just for Allen Craig. (Another 30ish for Matt Holliday wouldn’t be terrible, either …)

Pitching is going to be big this year. The real question is, where do all the pieces fit. Two particularly interesting pieces are the young guns, Rosenthal and Miller. I’m excited (and a bit anxious) to see how they fit into the game plan, as well as how they adjust to full-time play with the big boys (assuming, of course, that they end up in St. Louis to start the year). There is ridiculous talent between these two. I can’t wait to see it put to good use.

2. Carp and Waino together again

The kids aren’t the only ones with talent on this overloaded pitching staff. While it’s yet to be determined if Chris Carpenter is his “old” self again, or if Adam Wainwright can regain consistency in his mechanics, the simple prospect of two such stellar starting pitchers in the rotation at the same time (knock on wood, throw a little salt over the shoulder, cross fingers, toes, and whatever else … ) makes me all tingly inside.

Generic? Maybe. Actually, no. Because I’m planning to be there. Not living in St. Louis, I have to plan these things out well in advance. Here it is January 2, and I’m already planning. I’ve not been to Opening Day in St. Louis before, so I’m more than a little excited to experience it all — the pageantry, the history, the tradition, the legends, the energy — live and in person. I can’t count down the days fast enough.

Mostly, I’m just excited for baseball to be back. There’s nothing quite like it, and not even the enjoyment of college football season can make me miss baseball any less.

What are you most looking forward to for the Cards in 2013?