Cardinal fans young and old got to talk about their favorite team with some up-and-coming stars, a pitcher trying to make a comeback, a dominant closer turned exec and one of the voices of Fox Sports Midwest broadcast team for the Cardinals.

Yes, the Cardinals Caravan 2013 made a stop in Jonesboro, Ark., Monday and everything from what fans should expect this season to who is the biggest clown in the clubhouse was discussed. Children also got to have some of their favorite pieces of memorabilia signed by Brad Thompson, Ryan Franklin, Matt Adams, Sam Freeman, Michael Wacha and even Dan McLaughlin. 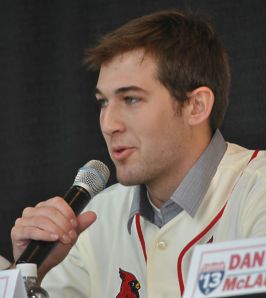 He was the 19th overall pick in the 2012 Major League Baseball draft out of Texas A&M. “The upside is huge with this guy,” McLaughlin said. “You might see him in the big leagues this season.”

Regarding his first season as a professional: It was a lot of fun in AA. We won the Texas League championship in Springfield. Cardinals Nation really shows up and we really appreciate you all coming out and supporting us.

Regarding success in 2013: Consistency. I like to throw as hard as I can. I just need to get consistent in locating my pitches.

What he’s been working on: Developing a slider but my primary secondary pitch is a change up, which is like a split finger but I grip it tighter.

Regarding his new facial hair: This is about six months in the making!

Fun Teammate: Jason Motte. He had me laughing. 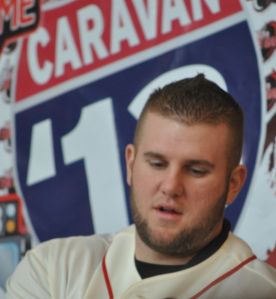 According to McLaughlin, Big is the key with Matt Adams.
“He’s a big first baseman, who puts up big numbers. We are expecting big things out of him,” he said.

Regarding making his major league debut in 2012: Debut was awesome. Made it to L.A. Great history on that field. It was awesome. The big league experience … it was a dream come true.

Key to a successful 2013: You gotta go out and win ball games. I’m going to go into spring training and get prepared.

Dan noted that Matt hit a homer over Tal’s Hill at Houston, which was one of the longest homers they have seen.

When a young fan asked about his arm: That’s a great question! I’m 100 percent. The doctor’s did a great job of cleaning all the bad stuff out and got me healthy again.

Fun Teammate: Rafael Furcal. When we win, he would put on his Latin music and dance around the clubhouse.

Regarding the Caravan: I played 19 years and this was my first caravan. Since I joined the Cards in 2007, I’ve been amazed at the fans that come out to these events and support us, whether we make it to the playoffs or not.

Regarding what he is doing now: I’m a special assistant to our GM, John Mozeliak. It’s a pretty good gig. I do player evaluations within our organization. I watch them play in the minor leagues, write up reports on how they are doing and submit them to the GM.

Regarding Facial Hair: I never got a tape measure out so I’m not sure how long it got. The field crew was talking to me after a game and they asked if I knew about a moth that came out of it during the game. I’m like no. I looked back. Slow mo’d it. And it was like boom! I don’t know how long it was in there. It could have had a nest for all I know. That thing was nasty. Its great for dental floss. Closers are disgusting. Look at Jason Motte. Lumberjack and Grizzly Adams as you can get.

Favorite Road Park: San Diego. It’s a pitcher’s park. Big clubhouse. The hotel we stay at, you look outside and see the beach. It’s beautiful.

Least favorite hitter: There were a lot in 2011! But there was a guy by the name of Manny Ramirez. He wore me out. He had three homers. And Alfonso Soriano. When I was in Seattle and he was with New York and Texas, I wasn’t smart. But I got with Dave Duncan. He put together a good game plan for each hitter. And it worked against Soriano.

Brad Thompson signs a hat for a fan at the 2012 Cardinals Caravan in Jonesboro Monday.

Regarding Cardinals Caravan: These events seem to get bigger every year and I think that’s what you get from winning.

Favorite Visiting Ballpark: I like pitching in L.A. While the clubhouse is just awful, I like getting outside and pitching there. I’ll tell you which park is not good. Cincinnati. Great American Small Park. Isn’t that what it’s called? It’s awful. And Philadelphia. Maybe it’s because I’ve given up a lot of home runs in these places. That could be it. Groundballs shouldn’t go over the fence.

Best Player on the Team: Yadi Molina is incredible. We all knew he was a tremendous defender. But now he can hit too. He is just tremendous. And he’s the smartest guy on the field. You have to have a leader at catcher and he is an absolute genius behind the plate. This pitching staff is ridiculous. I love watching Trevor Rosenthal.

Most entertaining teammate: I’m straight-laced. So I don’t know. Randy Flores was one of the funniest guys I’ve ever been around. Also, I got him ordained and he married me and my wife. Rev. Flo if you ever meet him.

McLaughlin
Regarding Cardinals Fans: 3.3 million fans came through the stadium turnstiles last season. That doesn’t go unnoticed and we thank you.

Regarding Stan Musial: He lived a long life. 92 years. We mourn his death. He was the greatest Cardinal of them all. It’s a celebration of his life when we talk baseball. If you’re going to give anyone a round of applause today, let’s give it to Stan the Man.

Regarding his broadcasting career: I decided to do this when I knew I couldn’t hit a curve ball! This is my 16th season doing Major League Baseball. I was 23-years-old when I did my first major league game. I got to do ball games with Jack Buck and Mike Shannon. For a kid from St. Louis that is a dream come true. I’ve always wanted to do this. I played college ball but I wasn’t nearly as talented as these guys. But I’m getting to do what I love for a team I grew up watching and loving, which makes it extra special.

Favorite Road Stadium: I love the history of Fenway Park. As much as we all hate the Cubs, Wrigley Field is fun because it’s a fun weekend with the fans getting together.

Regarding second base and a fan’s assessment that the Cardinals shouldn’t have traded Placido Palonco: “Scott Rolen was pretty good. He was part of that deal. However, second base … they are going to give Matt Carpenter a lot of at bats. They have advised him to get to spring training ready to play defense at second base. This will be an intriguing battle and story if he can do it. You already have Daniel Descalso, Pete Kozma and Ryan Jackson. They want to keep David Freese fresh down the stretch. Carpenter can help spell David down the stretch. And left field and right field. He’ll get some work there too”

Regarding Rafael Furcal: He is ready to go. He is 100 percent and we should be able to tell more at spring training.

Regarding prospects Oscar Tavares and Kolten Wong: Oscar is here to stay when he comes up. Want to give Wong a little more seasoning and bring him up later. But he will also be in play at second base.

Regarding his thoughts on the best player on the team: Most talented is Carlos Beltran. He is smooth and can do a lot. And Yadier Molina. He is unbelievable. But pitching wise, Chris Carpenter and Adam Wainwright. Adam had 14 wins last season and he didn’t have his best stuff. Watch out for him this season as he will be another year removed from Tommy John surgery.
This event shed some great insight on what to expect for the 2013 season in the minors and the majors. There is so much to look forward to this season!

With pitchers and catchers set to report before we know it, this fan is ready to see what this special season holds!

Miranda is a contributor to Aaron Miles’ Fastball. She’s also lead writer at Aerys Offsides. Follow her on Twitter, @missmiranda.