With Chris Carpenter “very unlikely” for the 2013 season and beyond, several things are clear. 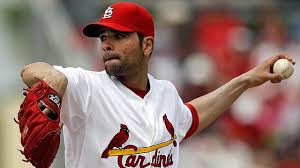 Adam Wainwright will be the official ace of the Cardinals rotation.

Jake Westbrook, while quite frustrating at times, will need to find the consistency button, and be a guy who can go 7 to 8 innings and get some outs.

Lance Lynn will have to be that amazing pitcher we saw at the first of the 2012 season. Remember him? We need him… not the guy who went four innings per outing at the end of the season and that was it.

We need Joe Kelly, Shelby Miller and Trevor Rosenthal to be everything we are anticipating and more.

Sounds like the Cardinals could use another piece to the puzzle doesn’t it?

There is Jaime Garcia.

I know why you have a blurry memory. Last we saw Jaime, he was walking off the mound after the second inning of the National League division series. Prior to that, he didn’t pitch much during the season after he and his shoulder were shut down.

For you stat geek types, Jaime had a 0.6 WAR in 2012. For comparison purposes, Kyle Lohse had a 3.9 WAR. … Plus Jaime was second in the NL with 12 wild pitches thrown. Yes. THAT is why we didn’t see much Jaime.

Jaime is already working out in Jupiter with Waino, according to the Post-Dispatch. He plans to throw from the mound today after throwing in the outfield on Thursday. Garcia opted not to have surgery in November on a tear in his shoulder. Throughout the offseason, the Cardinals said they had received positive reports on Garcia’s rehab and he checked out OK with trainers last month at the Winter Warm-Up. Thursday was the first time that Pitching Coach Derek Lilliquist had seen Garcia throw since he left Game 2 of the National League division series after the second inning.

Thursday though, Jaime only wanted to talk about the present. And at the present, Jaime felt good and healthy. Ready to pitch.

The next few days will prove quite interesting. Will Jaime continue to feel good and healthy and ready to pitch? Will he say if he isn’t? Should he have had his shoulder operated on?

Yes, yes. So many questions surround Jaime this spring. It feels all the more dire and important really since we’re down Carp.

Are the Cardinals prepared to use all of their young arms to start? Considering the plan had been for the odd men out going to the bullpen. Would they consider preparing lefty John Gast for the majors? Will they re-consider Kyle Lohse? Are there other options? I ask because a veteran pitcher would be nice to go along with the young guns! And do we really want to throw ALL of the young guys out there to start?

Yes, this is a lot more questions than you are used to from me regarding this team and pitching staff. But, I really question Jaime after last season. We all should. He wasn’t very forthcoming with the issue that plagued him last season. He seemed … done. And while this doesn’t even seem to be something given a thought to by the Cardinals, I’m thinking they should.

The next few weeks of Spring Training will be very interesting!

Miranda Remaklus is a contributor to Aaron Miles’ Fastball. She’s lead writer at Aerys Offsides. Follow her on Twitter, @missmiranda.