Note: Kelsey Shea is competing for a spot in the 2013 MLB Fan Cave. She is a life-long Cardinals fan, and would love to represent St. Louis in New York. This is her story, in her own words.

I’m no stranger to the MLB Fan Cave. But I was once…

I was once a girl on a couch crossing her fingers and holding her breath during the 2011 playoff season when a commercial caught my attention. “The most entertaining baseball fan,” it said. That could be me!

On a whim I applied, and out of 22,000 entries came my first Fan Cave campaign. Fifty, and later thirty, of us blogged, tweeted, and interviewed 24/7 in an attempt at the baseball dream job. And I fell just short.

Walking away from the experience, I told people that I wasn’t sure whether I would apply again. But I think I always knew I couldn’t walk away from an opportunity like this.

They call it the “baseball dream job” for a reason: the selected Cave Dwellers spend the entire MLB season in a space in New York City on 4th and Broadway designed by Extreme Home Makeover’s Paul DiMeo. The main feature is the “Cave Monster” comprised of 16 TVs on which they watch every single game. They get to blog and tweet about their experience, acting as a liaison between fans and players – yes, players! Did I mention they like to drop by?

Kind of hard to resist…So, of course, I’m back for my second shot. And I’m dying to represent YOU, Cardinal Nation!

Here are a few reasons why I would be the perfect ambassador for our St. Louis Cardinals: 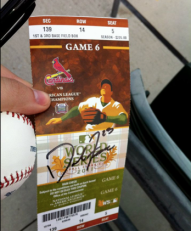 On a lighter note: I was at Game 6, I have my ticket signed by David Freese, and I also own a bottle of 2011 World Champion Cardinals beer that I’m waiting to crack open until they win their next World Series. (Hopefully soon, for the sake of everyone.) If that doesn’t get your vote, I don’t know what will!

Here’s how you can support me:

Last year, Kyle Thompson made it to the final three and we need a Cards fan in the Cave again. Help me represent the best fans in baseball and let’s show the rest of the MLB why we have that title!