It will be a few more days before Yadier Molina and Carlos Beltran are back at the St. Louis Cardinals spring training camp in Jupiter, Fla. 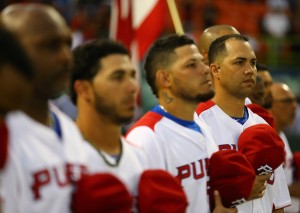 Puerto Rico’s 4-3 exciting win over Team USA last night means that they’re in the World Baseball Classic finals in San Francisco, along with the Dominican Republic, Japan and the Netherlands. And last night’s game really was exciting.

Puerto Rico had a 4-0 lead in the sixth before the U.S. scored one in the seventh and two in the eighth, with one on a two-out bases-loaded walk. At that point, J.C. Romero was brought in and he retired the final four batters he faced. (Yes, really. J.C. Romero.)

Yadi was, not surprisingly, Yadi as you can see in this clip when Jimmy Rollins tried to steal in the sixth inning. The video also gives you a hint of the atmosphere during these games, with the horns and the enthusiasm from the crowd (and Yadi’s own reaction). It’s comforting that no one ever seems to learn you can’t run on Yadi. Please continue to try, though …

He also received high praise during a post-game interview with starter Nelson Figueroa, who said Yadi is the heart and soul of the Puerto Rico team. He had a single last night and is hitting .417 in the WBC. Beltran had a double and scored a run, although he is only hitting .182.

With last night’s loss the end of the line for Team USA, that means Mitchell Boggs will be back in Jupiter. He had two appearances totaling 1 1/3 innings, allowing one hit and one walk.

In case you didn’t already know the news from yesterday — or didn’t already assume this would happen — Adam Wainwright was officially named the Opening Day starter yesterday by Mike Matheny. Here’s the story from Jenifer Langosch and — complete with auto-playing video just to thrill everyone — from Rick Hummel. (Seriously, Post-Dispatch, stop it with the auto-playing video. There can’t be one person anywhere who enjoys those.)

Also, in case you missed it from the other day, Jim Edmonds will be an analyst on the Fox Sports Midwest pre- and post-game shows this season. He’s taking over for Cal Eldred, who’s now a special assistant to John Mozeliak. Personally, I like Edmonds well enough but I loved Eldred’s insight and knowledge on the game and don’t see Edmonds being quite that detailed or knowledgeable. (Or teach me as much about pitching.)

It’s difficult to believe the U.S. Senate could unanimously agree on anything, but that’s what Stan Musial does to people — every senator voted in favor of naming the new Mississippi River bridge after Stan the Man. The bill now goes to the U.S. House.

Finally, Matt Adams has been having a great spring as we know. And he’s in the lineup for today’s game against the Tigers, along with Matt Holliday and Allen Craig, and Derrick Goold explains how Adams can easily receive plenty of playing time on the big-league roster during the regular season. Jaime Garcia starts today, with game time 12:05 p.m. Central. It’s on KMOX Radio.