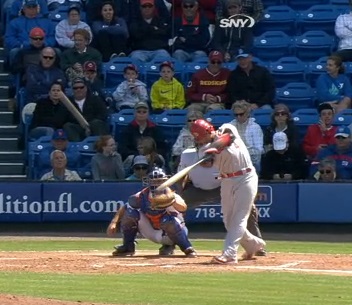 Yesterday’s game against the Mets feature a few big bombs (um, HELLO Pete Kozma! I see that grand slam power. Bravo, buddy!). But the one that meant the most came from our favorite Molina. And, not just because it was his first homer since returning to the lineup after the World Baseball Classic.

See, Mets fans thought they’d be cute and try to get under Yadi’s skin. Their taunt of choice was a simple, yet to-the-point chant of “Over-rated! Over-rated!” as Molina stepped to the plate.

Hold there, for a moment.

Just in case we’re not clear, here are a few basic definitions of this choice word:

to rate or appraise too highly; overestimate: I think you overrate their political influence.Origin:
1580–90; over- + rate1 overpraise, overesteem, magnify.

And, if you prefer the more “hip” definition, here’s a pair from the Urban Dictionary website:

Overrated
— A term used to describe something that gets more hype and credit than it’s actually worth.
or,
–An overly used word by people who don’t like something.

I know, I know. Defining things? Really? Yeah. I just sort of like to make sure these words are being used properly.

He’s on a blistering pace this spring, and kept Puerto Rico’s WBC team alive with championship hopes. Oh, and in the process of the WBC, Team PR’s manager, Edwin Rodriguez, claimed Yadi was “the best in the world.”

But … a word of advice? You tell a guy as good as Molina that he’s really not that good after all, and he’s likely going to say, “Oh really? Watch me.”

Making Yadi any more determined won’t work out well for you!

In case you missed it, THIS is what Matheny saw coming.

I know the season is still days away, but if THAT is what overrated looks like, I’ll take overrated any day.