Here’s a rarity: we’re all looking forward to Monday. Yes, the 2013 St. Louis Cardinals season is now waiting for us at the end of this weekend (although how many complaints will there be throughout Monday that the game doesn’t start until 9 p.m. Central Time? The perils of starting on the road, and out West …) 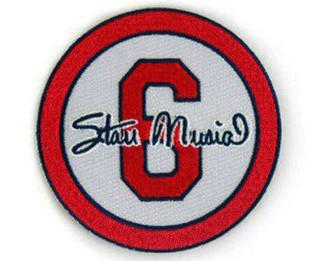 When the Cardinals take the field in Phoenix, they’ll be debuting the patch they will wear all season to honor Stan Musial. Unlike most memorial patches, as it says in the St. Louis Post-Dispatch, “there is no black, a nod to Musial’s always-sunny disposition. It features a red border and Musial’s number 6, in red, with his signature through the number. The background of the patch is the color of the jersey — gray for road games, white for home, and cream-colored when the Cardinals wear their new alternate jersey.”

The lineup taking the field Monday night is pretty easy to predict, even with David Freese on the disabled list — you could have developed this even without looking at the Cards website.

For more on Opening Day lineups and how interesting they can sometimes be, check this out at Viva El Birdos. (Warning: names such as Adam Kennedy, Khalil Greene and Troy Glaus are mentioned … and Brian Barden. Remember him?)

Now that spring training is over, here’s a look at the best and worst of the Cardinals in Jupiter from Scott Wuerz of the Belleville News Democrat.

One of the spring highlights obviously was the play of Oscar Taveras. Here’s a nice feature on him from the Springfield, Mo., News-Leader.

And while Taveras will not be with the big league club to start the season, Trevor Rosenthal will. Jerry Crasnick of ESPN.com wrote about Rosenthal, and of course his 100 mph fastball.

Forbes released its annual list ranking the most valuable teams in MLB and the Cardinals are No. 10. The current value for the Cards is $716 million, less than the average baseball team’s current worth of $744 million as the St. Louis Business Journal points out. It’s no surprise that the Yankees are atop the Forbes list, which you can find in its entirety here.

Finally, this isn’t necessarily Cardinals focused although Brandon McCarthy is starting against them Wednesday night in his Diamondbacks debut. But it’s a terrific article about a very interesting guy who’s great to follow on Twitter. Besides, how could I not post it?