A fortuitously timed rainout in Chicago on Wednesday means an intriguing pitching matchup tonight at Busch Stadium when the Milwaukee Brewers take on the St. Louis Cardinals. 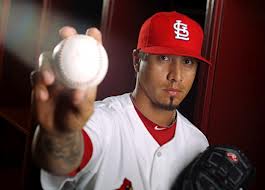 Lohse’s five seasons as a Cardinal were overall a success when you look at his numbers: 3.90 ERA in 136 starts and a 55-35 record. But 2009 and 2010 were not, given the exertional compartment syndrome in his forearm he was ultimately diagnosed with and underwent surgery for in 2010. (Plus it lead to that tattoo to hide his scar.) And reading this profile of him in the Milwaukee Journal Sentinel reminds me that, oh yeah, he was pretty much disliked by a lot of Cardinals fans in those two seasons because of how he pitched.

Not that he was necessarily a fan favorite during his good years either. Despite his success during the 2011 regular season, he was pretty bad in October with an NLDS ERA of 8.44, NLCS ERA of 6.23 and World Series ERA of 9.00. (Granted, only one start in each — but still …) And last year his 2.86 ERA and 16-3 record led the starters, of course, but you’d be hard-pressed to find anyone who regularly gushed over him.

And we only wrote a love letter to him after he pitched his final game as a Cardinal.

Contrast that with the excitement over Shelby Miller — when he was called up last season, when he made his first major league start in Game 162 last October, throughout the competition for the fifth starter spot this spring and in his first (apparently) “real” start last Saturday that resulted in his first (apparently) “real” win. Granted, Miller was a top draft pick and expectations are, and have been, high for him from the very beginning.

It still makes for an intriguing game tonight — past versus future, proven veteran versus top prospect.

As for those taking the field behind K-Lo tonight, they won’t be the Brewers you’re used to seeing as Bernie Miklasz wrote yesterday:

The Brewers, off to a troubling 2-6 start, are enduring considerable early-season turmoil. Let’s get you caught up on the developments:

First baseman Mat Gamel (knee) was lost for the season. Corey Hart, targeted to move (again) from right field to first base, is out until late May or early June as he rehabs from knee surgery.

The Brewers have five players on the 15-day disabled list including starting third baseman Aramis Ramirez and lefthanded reliever Chris Narveson. Both were on the opening day roster.

The Ramirez knee injury has a major impact on the Brewers offense, especially at his lineup spot, the No. 4 hole. In the first four games since Ramirez went out Milwaukee’s cleanup hitters went 1 for 18 with eight Ks.

Manager Ron Roenicke already has yanked closer John Axford, replacing him with Jim Henderson. The move was made after Axford gave up nine earned runs in his first 3.1 innings, with a blown save and two losses. Roenicke insists the move is temporary; he wants to give Axford a chance to regroup. Roenicke gave a slumping Axford a break from closing last season, and Axford rebounded to convert 17 of his final 18 save opps late last season.

Power source Ryan Braun missed three consecutive games with a stiff neck, and was still feeling discomfort when he returned for two games against the Cubs at Wrigley Field. And the team’s impressive young shortstop, Jean Segura, has been limping with a bruised left thigh and a sore right ankle.

Roenicke had to check himself into a Chicago hospital earlier this week to receive treatment for intense back spasms. He’s feeling better.

Milwaukee’s starting rotation has a 5.09 ERA. No. 1 starter Yovani Gallardo gave up 19 hits and 7 earned runs in 11 innings in his first two starts.

Milwaukee’s bullpen has a 6.11 ERA and opponents are batting .319 against the relievers.

Ouch — literally — to all of it, though it’s certainly not going to make me pity the Brewers in any way. (Sorry, Tracy! Actually, sorry I’m not sorry!)

Beyond the starting pitchers, tonight’s game is a tribute to Stan Musial with a pregame ceremony honoring Stan the Man, his family throwing ceremonial first pitches and the harmonica giveaway with all those in attendance playing “Take Me Out to the Ballgame” in the middle of the sixth inning.

Coolest tribute of all? The baseballs that will be used. 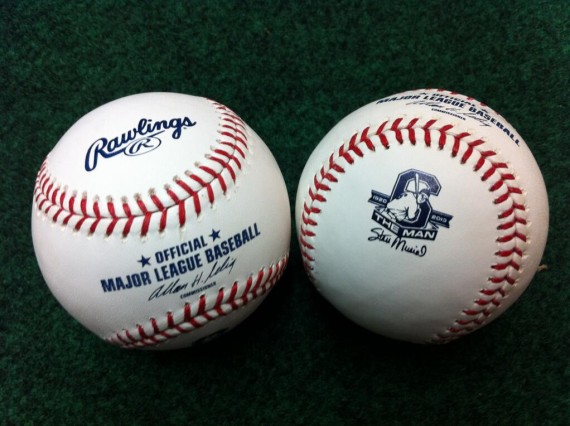 The first pitch with that awesome baseball will be by Miller at 7:15 p.m.

4 thoughts on “Cardinals Past, Cardinals Future On The Mound Tonight”