It’s no secret I’m not a fan of the St. Louis Cardinals television broadcasters on Fox Sports Midwest. On Twitter, I’ve made that very obvious the past several years. (Too obvious, it seems — the Fox Sports Midwest girls followed me for a bit when their Twitter account began … and unfollowed me shortly thereafter.)

Now that I again have access to watching other teams’ announcers regularly thanks to my MLB TV subscription, I’m aware all the more of how much better other fans have it. (Until two years ago, I subscribed to Extra Innings on DirecTV forever then didn’t renew because I found myself not watching as many non-Cardinals games anymore. Toward the end of last season, I took advantage of MLB TV’s discount offer for the remainder of the year and greatly enjoyed it — especially being able to watch on my phone. So I renewed for the season.)

Once again I have announcer envy.

Vin Scully of course, Glen Kuiper and Ray Fosse on A’s games (who I especially enjoyed during my Extra Innings days), Duane Kuiper and Mike Krukow on Giants games are all so good. Even Len Kasper for the Cubs is always my go-to choice whenever the two teams play. On Tuesday night, when I surprisingly wasn’t blacked out of the MLB Network broadcast of the Cards-Nationals game, I watched that instead — it was the MASN announcers. Hearing Bob Carpenter again was a nice blast from the Cardinals past.

But I’m not here just to complain about Dan and Al and Ricky and Jim Hayes and mindless chatter during games. I actually have a suggestion. It’s after watching the Pirates-Phillies game on Root Sports Wednesday night and a couple innings of their game yesterday afternoon.

Wednesday was a good pitching match-up, Wandy Rodriguez against Roy Halladay. A couple innings into the game, this graphic appeared on screen and Pirates analyst Bob Walk began describing Rodriguez’s release point on his various pitches. 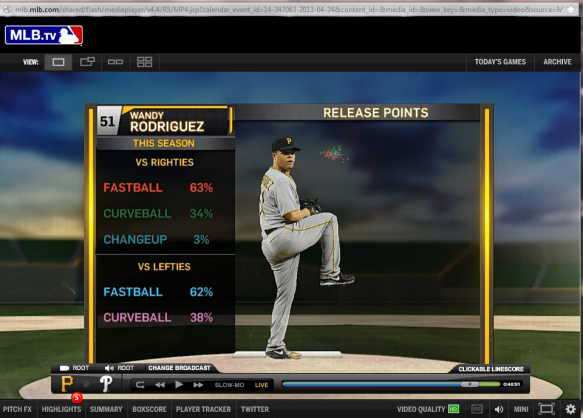 They enlarged the cluster showing the release points and Walk went into tremendous, and terrific, detail about each. Rodriguez even threw a very nice curveball to a left-handed Phillie batter as the discussion continued, allowing Walk to point out how it illustrated what he was describing about how his left hand is more toward first base when he releases the ball.

Fascinating, educational stuff. So much that I backed up the MLB TV player, grabbed this illustration and emailed my friend Michael about it.

Yesterday I caught a couple of innings during lunch, including an inning-long conversation with Pirates pitching coach Ray Searage. There was a release point chart for James McDonald that Walk and Searage discussed. Again, so interesting — as were the questions Walk and the play-by-play guy were asking Searage about the Pirates pitching and especially the bullpen. And so much better to listen to than rehashing yet again whether or not Stephen Strasburg should have been shut down at the end of last season — which was the last thing I heard from McLaughlin and Hrabosky on Wednesday afternoon while at home for lunch to catch a few innings. How is that even relevant seven months after the fact?

The helpful info provided during the Pirates games got me thinking about the Cardinals games — and I realized there actually is, from time to time, good and interesting content presented. It’s just not during the broadcast itself.

It’s during the pre-game and especially post-game shows.

I loved watching Cal Eldred, and learned much from his insights and knowledge of pitching (and miss that he’s no longer on). I’ve learned from Ricky Horton too, even though the knowledge is sometimes couched in the silly “ask Dr. Ricky” or whatever it’s called. So far this season it’s been hard to get a feel from what seems like an ever-rotating cast of former players, but some of the insights they’ve presented have been interesting.

Why not take some of that intelligent, good analysis and educational material and add it to the actual broadcast? Cardinals fans are smart — help us become even smarter. Bring the broadcasts up to our level, instead of continuing to attempt some frat-house vibe with awkward banter and silly comments inning after inning, game after game. Use the resources that obviously are available, since there are good features produced — but just use them during the game.

I know the ratings are high for Fox Sports Midwest, which to me says more about the number of Cardinals fans out there than the actual game broadcast itself. Personally, I take an alternative any time one is available to me — which is when the Cards play the Cubs, White Sox or Brewers. (Yes, I willingly choose Hawk Harrelson over McLaughlin and Hrabosky.) And when I do watch on Fox Midwest, I liberally use the mute button — as I did when the shutting-down-Strasburg-last-year discussion began on Wednesday.

But maybe it doesn’t have to be that way. Maybe there is a way to improve the information being provided to us during the Cardinals broadcasts.

As one Cubs fan who happens to get Fox Midwest and watched a Cardinals-Phillies game last weekend pointed out to me — unsolicited — we Cards fans deserve better.