A few years back, the Cardinals came up with this crazy idea to invite 40+ amateur writers/photographers/analysts (okay, bloggers) to a special, private event at Busch stadium. Bill DeWitt III and John Mozeliak played along, making themselves available to answer questions and provide insight. And, somehow, three years later, Blogger Day continues!

The Cardinals in recent years have done a great job incorporating non-traditional media into the way they share information. They’re not only committed to their own branches of social media, but they have embraced what we as fans have turned into quite the network of “non-traditional” coverage. And, the Cardinals staff make excellent hosts.

I keep trying to decide how best to describe the experience this past weekend in St. Louis. Last year, (my first at the event) I may have been so in awe of the whole ordeal that I didn’t realize the same things I did this time around. Let me try to explain …

You know how, as a kid, your parents would drag you to dinner with some old family friends, and you would be threatened within an inch of your life to be on your best behavior? It wasn’t like that. At all. Think, instead, about that trip to see your really cool aunt and uncle and your favorite cousins. Sure, they may expect certain things of you, but mostly they just want you to feel comfortable, have the best time, and go home ready to come back again. 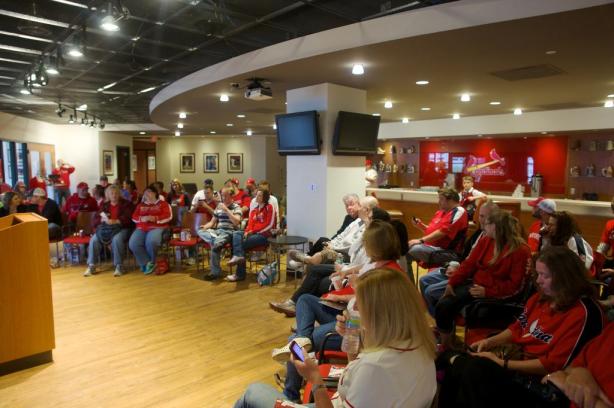 Photo courtesy of the Cardinals

The event is a reunion of sorts anyway, since most of us don’t actually live in St. Louis. So, we see one another once or twice a year. The efforts made by the media relations staff to get us all there and coordinated are tremendous each time, and it certainly makes for an even more enjoyable visit to beautiful Busch.

Many who attended last year were greeted by name as we made our way through the executive offices to the conference space where Mr. DeWitt and Mo would soon be joining us. Thanks to Lindsey Weber and Ron Watermon, we collected not only tickets, but also Carlos Beltran bobbleheads.

And, we were just getting warmed up.

I can’t speak for how John Mozeliak relates to “regular” media, but I want to commend both him and Mr. DeWitt on their complete candidness with us on Sunday morning. Mo came in saying that he had some business to attend to, so he may not stay long. (Sidebar: “business to attend to?” … later that day, Seth Maness was called up. Interesting.) And yet, I don’t think he would have left at all had Ron not reminded him that he needed to do real work.

Both men were quite open, witty, and willing to answer any question (regardless of how crazy it might be!) with a genuine response.

Mo — wisely — began his opening comments by addressing the bullpen and the stagnant offense. The team, in its current state “is not where we want to be,” he said. But, he quickly followed that by applauding the fact that the Redbirds are still winning games, despite the adjustments yet to be made. Those two things addressed, our questions would stem from elsewhere. Mo fielded questions about Oscar Taveras, Kolten Wong and Michael Wacha (“They’re major league ready now. We just don’t have a spot for them.”), draft strategies, theories about technology and the increasing velocity from starting pitchers (which he elaborated on by saying velocity is good, but pitchers have to pitch. Execution is what makes them major league standouts.), and how much longer fans will have the chance to see Carlos Martinez with AA Springfield: “Get there quick, big boy,” he responded. Point made.

He also approached the issue of middle infield help (read: shortstop!) coming from the minor leagues. We all know about the pitching prospects, Taveras, Wong, etc. But, I asked, what does he see coming through the pipeline to address other issues like, say, the middle infield? The answer? Nothing, at the moment. Looking three, four, five years down the road, he said, there aren’t any real standouts at shortstop. But, the depth in other areas of the minor leagues means the middle infield will be a focus of the upcoming draft and international market.

He went on to explain that the Cardinals have been in a situation in recent years where they haven’t directly addressed certain issues (again, read: shortstop), but they have come across guys like Daniel Descalso and Matt Adams who have worked their way into a position to contribute and fill in gaps. Mo also reiterated the pride the club takes in homegrown talent — last year, the Cardinals led the Bigs in that category. “We’re not afraid to promote from within,” Mo said, taking great pleasure in talking about Jermaine Curtis who was just promoted days before, based on his production in the minor leagues and the need for a bench player while Matt Adams is on the DL.

My favorite Mo response, though, was when my UCB Radio Hour partner in crime Matt Whitener asked Mo what he though of Shelby Miller’s performance so far. He smirked, leaned forward, and knocked on the wooden podium in front of him.

… definitely a “cool uncle” response, rather than that of a stuffy old family friend!

And Mr. DeWitt was much of the same. He gave a thorough update on Ballpark Village, scheduled to open spring of 2014, and spoke with great excitement about the collections that will be displayed in the Cardinals Hall of Fame (which will be different than simple having major league HOFers’ items on display). Phase one will include “Cardinal Nation” — a restaurant, bar, shop and HOF museum complete with a rooftop party deck with, accessible with special all-inclusive game tickets — a Brew Pub (an Anheuser-Busch project), and a “Live Market” — an event space with a retractable roof that will host events year round.

He also addressed Chris’s question regarding the red hat/blue hat issue: The introduction of the red hat was purely fashion based — Mr. DeWitt isn’t a fan of blue hats, blue belts, and red shoes. Blue shoes aren’t an option, and having alternate road shoes isn’t practical. So, he wanted to try the red hats with red belts to match the red shoes.

Okay, I see his point!

But what about the voting? Essentially, the poll conducted didn’t produce clear results one way or the other. Plus, the votes were collected before fans had the chance to see the red hats with the away uniforms. Since the results were inconclusive, and a final decision hasn’t been made, here’s how they’ve been deciding which hat/belt/shoes combo to wear: Red hats on days they play opponents without red in their team colors, blue hats when their opponents are wearing red.

So, now you know.

After covering just about everything (including Ty Wigginton’s “value”), we were given a very special parting gift: the very same Stan Musial pin that the staff is wearing in honor of “The Man” this season. So. Cool.

The game was … well, not the highlight this year. But, the food was as spectacular as ever. “Four-hand” nachos, chicken cordon blue brats, brisket, barbeque pork, and brownies that are to die for … to name a few of the samplings.

So, the Cardinals welcomed us, humored our curious minds, and treated us to the best cuisine Busch can offer. Yep, for a day, the United Cardinals Bloggers felt like part of the family.

Many thanks to everyone that helped make the weekend — including the dinner Saturday night — possible. Special thanks to BlitzCorner, Any City Sports Fan, Out Of The Park Baseball, eGraphs, STL Sports Page, Bonfyre, Topps Baseball Cards, ISA Grading Service, Fox Sports Midwest and, of course, Lindsey Weber, Ron Watermon, and the St. Louis Cardinals.