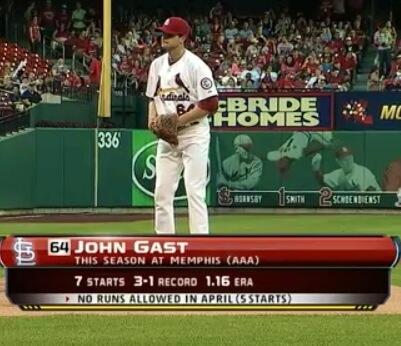 It was a spectacular start to the major league career of John Gast. It was even more spectacular that he got plenty of run support in his debut! The Cardinals defeated the Mets 10-4 Tuesday night.

The amazing start continued from there for Gast.

He threw 71 pitches over the course of six innings. Of the 71, 48 of those pitches were strikes. He threw three strikeouts.

Gast did give up six hits, a walk and had four earned runs thanks to some struggles in the sixth. According to Jenifer Langosch of MLB.com, “Gast did stumble in the sixth, allowing three straight batters to reach with one out. A botched rundown later extended the inning long enough for Marlon Byrd to connect for a two-run homer. But maintaining his poise, Gast closed his outing with a strikeout — the same result with which he had opened his night.”

Langosch also reported Gast was “[t]he first Cardinals left-hander to make his debut as a starter since Rick Ankiel in 1999. Gast is now the first lefty starter to win a debut since Allen Watson in 2002. Asked how the long-time dream measured up to reality, Gast answered: “It was pretty close.”‘

Very exciting for the 24-year-old. I know I am far from alone in looking forward to more great starts from this guy!

Seth Maness, Carlos Martinez and Joe Kelly combined to throw three innings of no-hit baseball. Carlos struck out three and walked a batter. Joe gave up a walk and struck out two.

Cardinals fans got to see four of the Cardinals top young pitchers.

Stop for a moment and think about years past. How awesome is this to have so much fantastic young pitching!

Now let’s talk about how the Cards got those 10 runs!

Carlos Beltran belted his tenth homer of the season. It was a 437-foot blast to Big Mac Land. He scored Pete Kozma and Gast on the blast off relief pitcher Robert Carson. Jon Jay knocked his fourth home run of the season in the sixth off Carson.

Miranda Remaklus is a contributor to Aaron Miles’ Fastball. She’s also lead writer for Aerys Offsides in the NFL section. Follow her on Twitter, @missmiranda.