Welcome back, Jake Westbrook. Welcome to the 10-win club, Adam Wainwright, and congratulations on strikeout number 1,000 (and numbers 1,001 through 1,005).

And the performances by Westbrook and Wainwright — and Friday night’s and Thursday afternoon’s games — proved that great pitching and pitchers’ duels are a lot more fun, and a lot less frustrating, to watch. 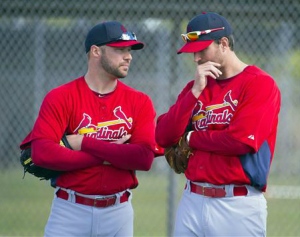 Yet both games are just part of baseball. It’s trite but true — can’t win ’em all. Sometimes the worst team in baseball beats the best team.

Which is exactly what happened Friday as the Marlins beat the Cardinals 5-4. Westbrook allowed all 5 runs, though only 3 were earned, and 8 hits in his return from the disabled list while the Cardinals struck out 13 times on their way to scoring those 4 runs. Ouch.

And sometimes expected pitchers’ duels — like Wainwright vs. the Mets only good pitcher this season, Matt Harvey — actually live up to expectations. The Cardinals prevailed 2-1, Waino won his major league leading 10th game and Edward Mujica earned a shaky-yet-successful 19th save.

Ah, well, both of those games are now baseball past. Today is a new game — and today is also the 30th anniversary of a trade that Chris Jaffe describes at The Hardball Times as “one of the most incredible and obviously one-sided trades of the 1980s occurred” — the Cardinals trade of Keith Hernandez to the Mets for Neil Allen and Rick Ownbey.

This trade made no sense in terms of talent. None at all. That’s because it had nothing to do with talent. St. Louis manager and GM Whitey Herzog had another thing on his mind. Drugs. He was concerned about the early-1980s climate of drugs around the game and felt Hernandez was a user and spreader of cocaine. (And in fact, in the mid-decade baseball cocaine trials in Pittsburgh, Hernandez’s former Cardinals teammate Lonnie Smith named Hernandez as someone involved in drugs.)

Herzog wanted Hernandez gone in order to try to stop Hernandez’s rumored dealing, and also to send a message to his players to stay away from this stuff. After all, if Herzog would dump the charismatic MVP, do you think he’ll take any guff from anyone else?

In better trade news, and also in that same piece from Jaffe, is this tidbit — so be sure to remind every Cubs fan just what happened on this day in 1964.

The Cubs and Cardinals engage in a four-player trade, but there are only two names involved anyone remembers: Brock and Broglio. The Cubs get starting pitcher Ernie Broglio, and the Cardinals land future Hall of Famer Lou Brock. Yeah, this works well for the Cardinals.

The trade happens early, allowing Brock to play for St. Louis today, and he strikes out in a pinch-hit appearance. But the next day he’ll go 2-for-3 with a triple, stolen base, and two walks—and it’s off to the races for him from there.

In some non-historical news, David Schoenfield of ESPN says that Adam Wainwright is making a case as the best starter in baseball right now.

Danny Knobler of CBS Sports has some well-deserved love for Yadi.

Finally, someone we loved writing poetry about last year — Barret Browning — was released by the Cardinals from the Memphis Redbirds a couple weeks ago and is hoping to catch on with another team. Good luck to Barret!

The Cardinals and the Marlins are back at it again this afternoon, with game time 3:10 p.m. Central Time. Lance Lynn and Tom Koehler are the starters.