At game time 11 years ago, it was just another night. Just another game.

We didn’t know then what Tuesday, June 18, 2002, would come to signify in St. Louis Cardinals history.

Not long after the Cardinals beat the then-Anaheim Angels came the first shock: Jack Buck, be 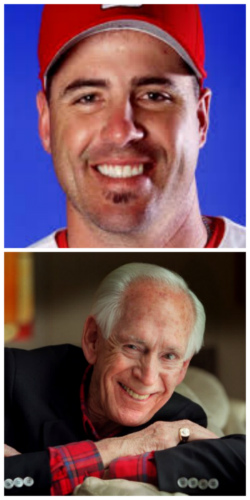 His son Joe was on Fox Sports Midwest that night, calling the game, the 7-2 win that put the Cardinals into first place, a position they would hold for the rest of the 2002 season.

Remember, through your sadness through the next couple of games, thinking how appropriate it was that the Cardinals were playing the Angels at the time we lost and mourned Jack? It just seemed fitting.

Pitching that Tuesday night, earning his fifth win of the season, was Darryl Kile.

What we didn’t know, what we couldn’t possibly have even comprehended at the time, was that it was for the final time ever.

Four days later, the mourning we still felt over Jack the day after he was laid to rest turned into unbelievable shock and incomprehensible grief as we learned Darryl died in a Chicago hotel room.

Even now, 11 years later, thinking back to that day brings all the memories back. Listening to the Cardinals radio broadcast in my car as I drove to my parents’ house following a cousin’s graduation party, knowing from the on-air descriptions something terrible had happened but — inexplicably — piecing together in my head from what was being said an umpire must have died and that was the reason the game hadn’t started. Arriving at my parents’ house, seeing a Yankees game on FOX instead of the Cardinals and going to their computer room to investigate further. A short while later looking at the St. Louis Post-Dispatch’s website and learning the awful truth, sharing the moment with my Cardinals fan uncle who was in town for the graduation party too.

I don’t remember if I cried right away — maybe I was too stunned to even react. Surely, though, I would have upon seeing Joe Girardi on television making the announcement about the game being cancelled. I can’t ever see a man cry and not cry myself. And then there was Tony La Russa crying and wiping his face with a towel as he talked to Joe Buck — Joe, who had to still be feeling his own tremendous grief over his dad and now had to discuss this.

I do remember driving home and listening to the Cardinals radio broadcast along the way, switching on occasion to the Chicago stations as well, then watching ESPNews for hours on end even though it was the same information over and over. I also remember the emails from my friend Michael, telling me to call him and his wife Tammy if I wanted to talk.

So many memories, like I had lost a member of my own family. Which, as Cardinals fans, we definitely feel like the players are.

Last year, on the 10th anniversaries of the passing of both Jack and Darryl, the members of the United Cardinal Bloggers wrote about one or both of them as our June project. I chose to write about Darryl, about the final inning of the final game he pitched on that Tuesday night 11 years ago. Here’s a link to it.

One thing about that is for certain: there definitely were tears as I wrote it.