Yes, we’ve reached the official halfway point of the season, since yesterday was game 81. And a record of 49-32 for the first half is certainly terrific. 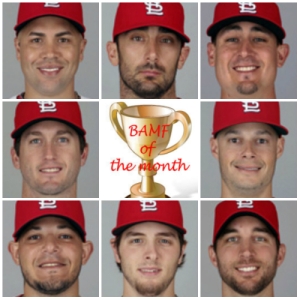 Second-best in the majors, as a matter of fact, yet also second-best in the National League Central thanks to the how-do-they-keep-winning-games-like-that Pittsburgh Pirates, who won their second consecutive 2-1 game over the Brewers yesterday for their ninth straight victory and 51st overall.

Still, there’s so much baseball left to be played (plus so much against the Pirates and — let’s not forget about them, the Reds) that it’s going to be an exciting rest of the season. Right?

And despite the disappointment of the Cardinals .500 record last month after such a terrific May, there were some definite standouts throughout the month. Which means it’s time to present our June BAMF award.

But this time, you get to vote — and there are plenty of nominees. In fact, you might just read through all these numbers and wonder “wait, how did they lose 14 games for the month?”

Here they are in alphabetical order.

Matt Carpenter: He had an 18-game hitting streak through June 9 and has a 10-game streak in progress now as he hit .342/.402/.532 with 38 hits that included six doubles, three triples and three homers plus 14 RBI. His overall average of .322 is tied for fifth in the NL with that other guy who catches for some team out West.

Kevin Siegrist: Yet another rookie pitcher with a sparkling debut. He’s thrown 10 innings in 10 games, compiling 13 strikeouts while allowing only two hits for an ERA of 0.00 and 0.50 WHIP with opposing batters hitting only .063 against him. 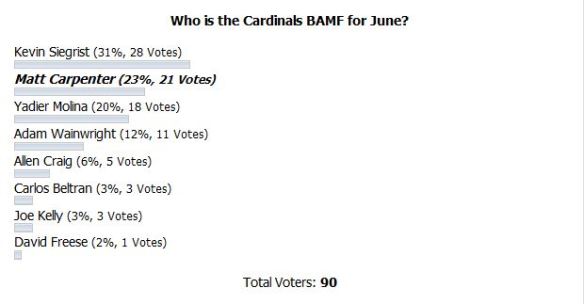 Sorry, this poll is now closed — thanks for voting!